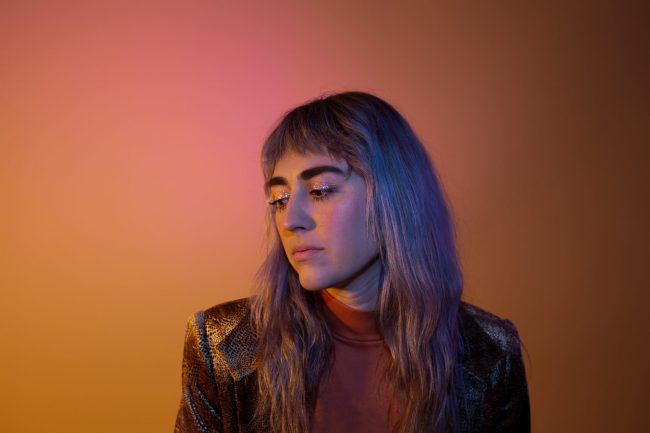 Ever since I set my career into motion with gallery and concert reviews, I have always been particularly fond of writing about artists. While it’s a challenge, and can certainly be intimidating, to capture someone’s life story in 500-or-so words (especially for a demographic with such a strong vision,) it’s also rewarding to find the way that suits them best. As an artist myself, I get the need to get your story right. Furthermore, when attention spans are nonexistent and content is endless I am just grateful that there is still a need for the sacred artist bio. In my eyes, it is proof that listeners still want to know the soul behind the songs, and that not every artist has succommed to compressing their personal narrative into bite-sized clips. Most recently, an artist that wanted to share her story indepth, which is my kinda way, was Lindsay Starr, whose songwriting on her debut LP “Blaming the Weather” belies her age. I had a great time learning about what brings Lindsay comfort and also causes her anxiety in the creative process. Understanding the highs and lows behind someone else’s art always reminds me that it’s impossible to get to the good stuff without angst. As Lindsay so graciously reminded me, it is better to be honest (in a kind way, of course) than to hold back in order to make others comfortable. P.S. Check out Lindsay’s wonderful record here and please keep me top of mind if you know of someone who needs a compassionate writer to craft their personal narrative.

“More unsettling than gut-wrenching honesty is for Lindsay Starr to hold back. Since discovering songwriting as a teenager, the craft has kept the wise-beyond-her-years artist sane. Starr, an emotional creature, would virtually implode if she didn’t give her internal landscape voice.

Yet as great a need as she has for transparency, Starr’s sense of artistic responsibility is stronger. She had to ask herself, how real is too real at the beginning of recording her first LP “Blaming the Weather.” Her intention as a songwriter has long been to make listeners feel less alone by speaking the truth. Still, when articulating the highs and lows of her life post-2020 she wanted to be sensitive to her audience’s emotional state. Along with her producer Kyle Henderson they began searching for ways to strike a balance between being literal and offering listeners solace.

“The craziness of the 2020 moment made me want to mask even less,” Starr explains, “but also, having exited a difficult time myself, I in no way, shape, or form, wanted to bum others out.”

Fortunately, Henderson, who also felt a desire to be artistically free due to the global crisis, had a solution. In the form of a creative exercise, he suggested they reshape Starr’s songs, which were on the more serious end of the spectrum, into a pop format. The genre catered to her no-frills writing style and would allow her to address heavier topics in a lighter presentation. All at once, she could give listeners a reality check and a sonic pick-me-up. Though she had initially resisted pop for its mainstream appeal, Starr quickly gave in recalling how the genre kept her energized and excited. The dichotomy that would result from their spontaneous switch-up is “Blaming the Weather,” which explores the dark side of life in danceable, psych-pop tracks.

While Starr and Henderson relished creating at a time when there were no distractions, both admit the process was a work-in-progress; one built upon trust, being present, and trying different techniques. Particularly for Starr, someone whose perfectionism had been debilitating in the past, it took a leap of faith to let go and let the record shape itself. While relying on her impulses felt foreign at first, song-by-song Starr came more out of her shell. She trusted Henderson’s ability to intuit and interpret what she couldn’t say. As a result, instead of getting stuck on single lines, being in sync with her collaborator made her want to take chances. Piece by piece, they refined and added a new dimensions to every track.

Now in a looser mindset, inspired by the more laidback Henderson, Starr made the decision to incorporate any shortcomings from the creative process on her album. Those ‘we didn’t mean to do it’ moments became yet another way to relate to her audience. Just as flaws on her favorite records made other musicians more accessible, she hopes those missteps humanize her even further. “A lot of times the parts of songs I hated became my favorite parts,” she admits smiling. Similar to showing off her emotional scars, the happy accidents that Starr chose to make a part of her alum are another rebellion against perfectionism.

As the artist gears up to put a very different side of herself into the world, she can rest easy knowing no emotional stone was left unturned. Being real is equivalent to responsibility in Starr’s eyes.

“I hope that by sharing my secrets, the listener will automatically and authentically relate,” she explains. In a time of divisiveness, Starr draws a bridge by reminding listeners that we all go through the same stuff.