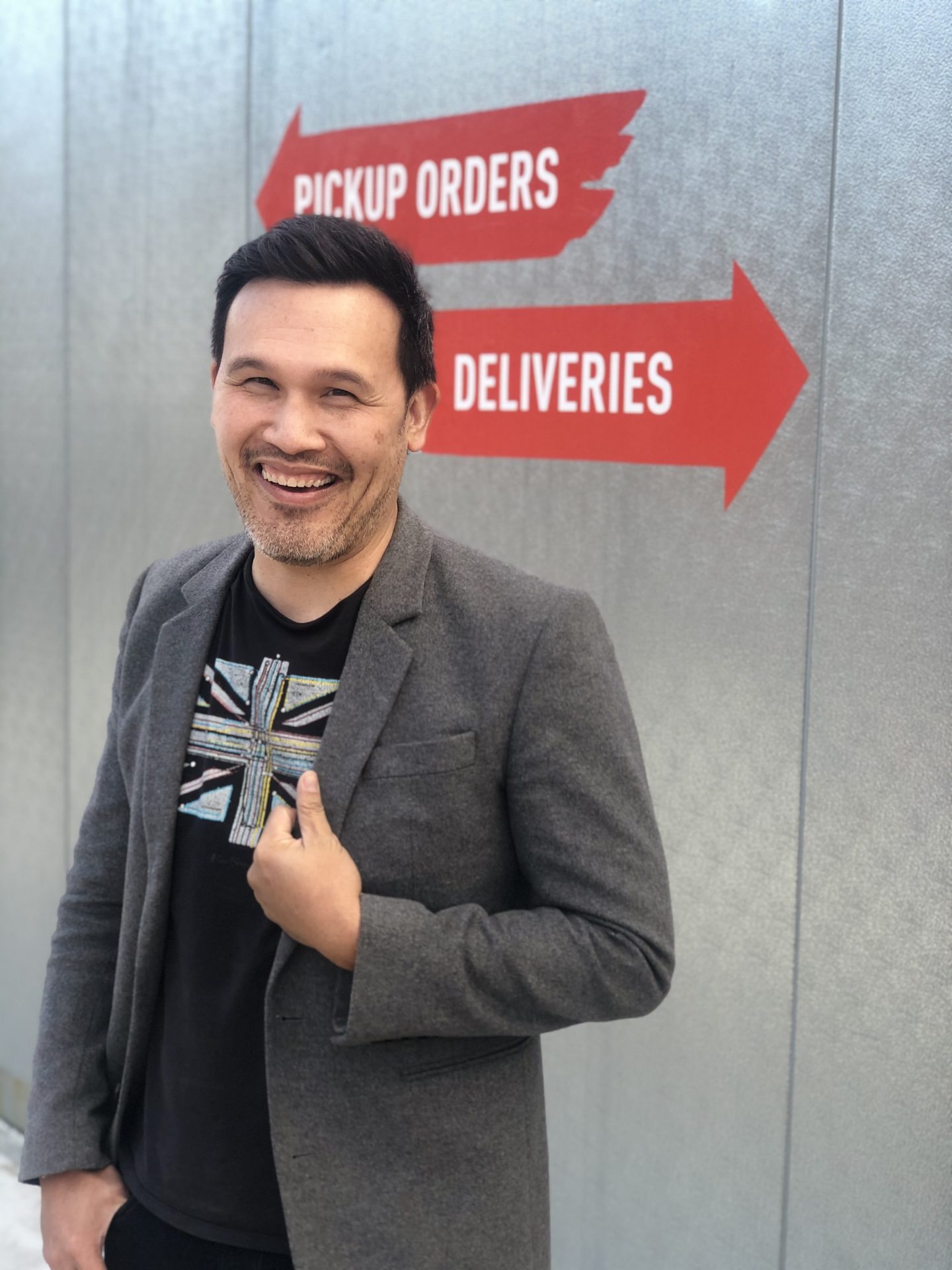 Perry Chen, who likes to affectionately be known as “The Wolf,”is the Director of Strategy at Hattie B’s, a fast-casual counter-service operation based in Nashville, Tennessee. While the restaurant group has recently expanded into other metropolises, tourists still flock to their original Nashville locations for their famed hot chicken sandwich and “dirty bird fries.” Perry, who I have known for almost seven years, and I chatted one day at the The Virgin Hotel about how Hattie B’s is coping with Covid-19 and keeping their doors open in the toughest year in small business history. As someone who worked in bars and restaurants for 15 years, and is devastated by the mass extinction of them in 2020, I was thrilled to gather Perry’s perspective as he is always grounded, positive, and realistic.

I’m always interested in interviewing the people behind the scenes like yourself because you’re the guys who used to tell me what to do! Can you tell me a bit about your  background?

PC: Like a lot of first-generation Asian folks, I grew up working at my parents’ Chinese restaurant. Hospitality is technically my first and fourth career. At nine years old, I was bussing tables or making change at the cash register however, my parents discouraged me from pursuing that path. So instead, I went into IT and then real estate. In 2008, my then-wife and I moved from New York City to San Francisco, California where I spent six months trying to find any kind of job. Just as I was about to run out of savings, I stumbled across a position at a cute little jewel box place called Boulette’s Larder in the Ferry Building. The owners were wonderful and the menu was fresh every single day. It was exciting because they would walk down to the Farmer’s Market and a few hours later, amazing dishes would appear. I was a personal assistant and administrative office manager and essentially, did a little bit of everything.

Did that make you more easygoing and flexible, just as a person?

PC: Absolutely. Especially these days with Covid-19, we have had to adapt and make our environment work in this new world. Fortunately, restaurants are about flexibility and figuring it out.

How did you go from working in San Francisco to Nashville?

PC: My now ex-wife and I got pregnant and realized we couldn’t be thousands of miles away from our family with a baby coming. Her family lived in Murfreesboro, Tennessee, and my family in Fort Lauderdale, Florida, so I started applying for jobs in both places. One day, I interviewed for the General Manager position at {the now closed} Marche in East Nashville and got the job. I worked there for almost three years. It was ironic because I went from working for one really strong woman to another! Margot, the former owner and executive chef, is tough but once you break through that hard exterior, she is full of love. As I’ve gone on in my own career, I’ve become the same way. I am always going to give the new person a smile and pat on the back, but it takes a while to earn their way into becoming a part of the family.

What happened after your three-year tenure there?

PC: I found out that The Goldberg Brothers were opening Pinewood Social in Rutledge Hill and decided to be a part of the opening squad. I look back at the ten months I worked there and it feels equivalent to the six years I’ve worked at Hattie B’s. There were so many people, and it was such a complicated layout, that it truly stretched me as a professional.

How did the Hattie B’s position come about?

PC: One night I was out and a friend told me that the Charlotte Avenue Hattie B’s restaurant was opening up. I applied for the job and came on about one month after they opened up.

Pinewood was 13,000 square feet that consisted of a patio, pool, and bowling alley and I said to myself, I wouldn’t mind going somewhere that only focused on one thing and doing it really well. I needed to simplify my life and Hattie B’s was the perfect opportunity for that.

PC: Absolutely! People crave consistency but not repetition. So, the question is how do you give people the same experience that they are used to in a way where they don’t get bored with it? Focus is an art form and allows you to not think about a bunch of other stuff that doesn’t matter. Every day we ask ourselves, How do we give people a great piece of chicken and make them feel like a rock star so they go home and say, “that was amazing!”

Let’s talk a little bit about Covid and how Hattie B’s has adapted to the current situation.

PC: Thank God I had already been here for almost six years, which gave me a solid foundation for coping with this. My first thought was, we’ll find a way to figure it out. In the beginning, the hardest thing was not understanding how the virus transmitted. It was scary. We had to become amateur doctors and figure out how to keep staff and customers safe from Corona Virus. Unfortunately, the government agencies, from top to bottom, have outsourced that responsibility to the restaurateurs. The health department can come in and say, “People are too close together in your line. You have to police them.” So, in order to handle the situation, there are three options: 1) Close the door and put all your people out of work 2) Stand on the street and scream at people so they space exactly six feet apart or 3) It sort of is what it is because most businesses can’t afford a super expensive security guard at every hour, in every location, to make sure people are following rules correctly. By default, we have become the bearer of the burden. We do the best that we can but it’s not easy because the mentality these days seems more about punishing business owners rather than helping them.

PC: Exactly. The government doesn’t have much money to spend on Covid-19 precautions and neither do we so I’m not sure there is a concrete solution. It’s just tough to do less business, incur more costs to keep people safe and police people all at once.

How have the servers taken to taking on that level of responsibility?

PC: There are a lot of people who are really great at their job and have opted out of the industry. They may never come back because the situation was too scary for them. For other folks, there are various levels of fear around coming into work every day. How are you supposed to make someone happy when you’re afraid all of the time? If your livelihood depends on making sure other people are joyful and you’re scared of getting sick, it’s tough. So again, we are doing our best and trying to give great service while also keeping our staff safe.

You seem very accepting of the situation and realistic as well. Is there a reason why?

PC: When I was very young, my mom had a stroke and, as a consequence, was paralyzed for the rest of her life. That element of “shitty things can happen at any time” helps me make the most out of what is going on. It is and has always been, how I process life. Getting upset doesn’t help so I just try to have the best attitude that I can and be patient until things improve.

Have there been any silver linings to the situation?

A lot of people were super grateful back in April, during the lockdown, that you could order to-go order at Hattie B’s and almost as importantly, a six-pack. On a different note, most service industry people have always enjoyed blowing off steam after work by going to the bar. Without bars being a super viable way to spend one’s time these days, employees have to find another way to deal with negative emotions. Some employees would freak out over something small and I would remind the managers that we have to cut people slack right now because everyone is on edge. It seems trivial but that loss of comradery has had a huge effect on people’s moods. We all need ways to decompress and deal, and service industry folks typically do it by pounding a beer and chatting.

Fortunately, I agree with a great article that I read the other day about how after the 1918 flu pandemic The Roaring Twenties happened. So, I honestly, truly believe that once this is done people are going to go apeshit. In a good way. Fingers crossed. If we can all just make it through this then there will be light on the other side.

Live Interview with Buddy Jackson at the Rymer Gallery