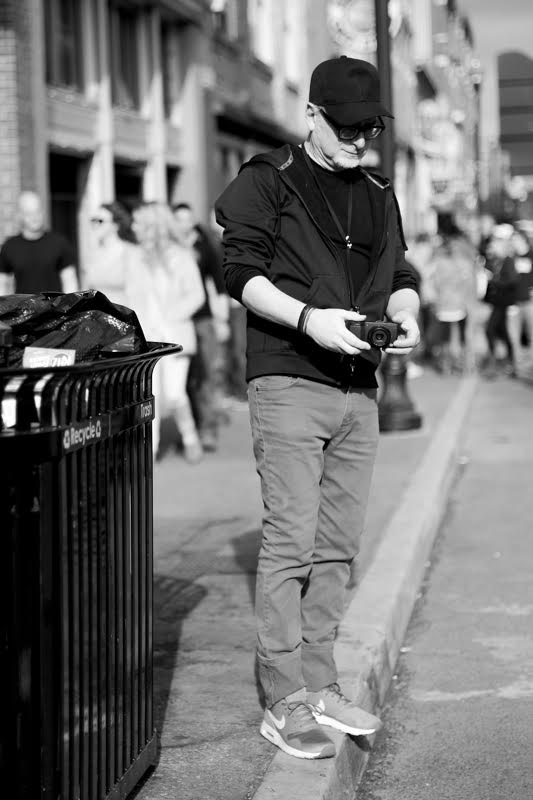 Hey guys! I am super excited to announce that I will be hosting my first live interview of the season at CONVERGE on Thursday July 18 at 6PM to celebrate the release of street photographer and art director Michael Ray Nott’s first book, Good Morning America, How Are Ya! Here is the press release and bio that I wrote for Michael in honor of the event. We hope to see you there and in the meantime, check out his book on Amazon!

Chance encounters, spontaneity, and humanity are at the core of documentary photographer Michael Ray Nott’s new book, Good Morning America How Are Ya! Shot entirely in public spaces, the book studies how the people of Nashville reacted to the political madness of the last four years. The photos, contextualized by Nott’s fascination with voyeurism and exhibitionism, encourage viewers to come to their own conclusions about our current political climate when looking at them.

“I tried to show what was happening in a non-judgmental, level-the-playing field way,” he says. Most charmingly, Nott, who does not take himself, or his too work, too seriously, jokes that the recent phenomenon of social media made his job a breeze. “We are all on camera all of the time,” he says. Nott purposely took photos in situations where people were there to be seen. He tackles touchy subjects in a lighthearted, down-to-earth manner rather than confrontational CNN-like way.

Nott knew he wanted to leave his home state of Wyoming after trudging through the snow as a kid. He relocated to Austin, Texas, after reading about it in Rolling Stone and enrolled as an art student at the University of Texas. There, he was first exposed to photography in Garry Winogrand’s class as an undergrad. The artistic legend taught Nott the philosophy of photography, marked by incessant shooting and learning how to look through lenses. Nott, whose own photos are also free form, similarly shoots every day, sifting through hundreds of images to find the gems.

After college, Nott worked as a magazine art director in Austin and Houston, Texas. In 1987, the oil business crashed and he and his wife moved to Nashville where he eventually became partner at several custom publishing companies. Six years ago, Nott left the corporate world and decided to follow his desire to raise public awareness around social issues through photography. After he was hired as art director at The Contributor, Nashville’s street newspaper, Nott achieved his dream of receiving a press pass that afforded him to have access to any event. He took his first photos for Good Morning America How Are Ya! at the Trump rally in December 2015 and over the next four years, amassed a collection to draw upon for his book. After accessing the material, he began to question how to take heavy stuff and lighten it up.

Good Morning America How Are Ya!, which mirrors the off-the-cuff way in which the images were shot, breaks down events into a single, symmetrical, and sporadic image. When taking his photos, Nott kept his mind clear and remained ready for anything. He is addicted to using the street as his stage and random passerby as his subjects. Spurred by a great curiosity about humanity, Nott woke up hungry every day to stand on the side of the road, wait patiently, and people-watch while he took photos. His photographs, inspired by his photographic muse Robert Frank, aim to give an overview rather than a specific statement. In his work, Nott, a calm and soft-spoken artist who ironically loves large crowds, chaos, and action, shows that we are all connected. “This world moves fast, which is why I try to create my own time zone in which I can capture all walks of life and slow things down,” he says.

Good Morning America How Are Ya! is now available on Amazon CONVERGE is located on the second floor of the SNAP (South Nashville Action People) Building at 1224 Martin Street

A Look Back at Sip It!