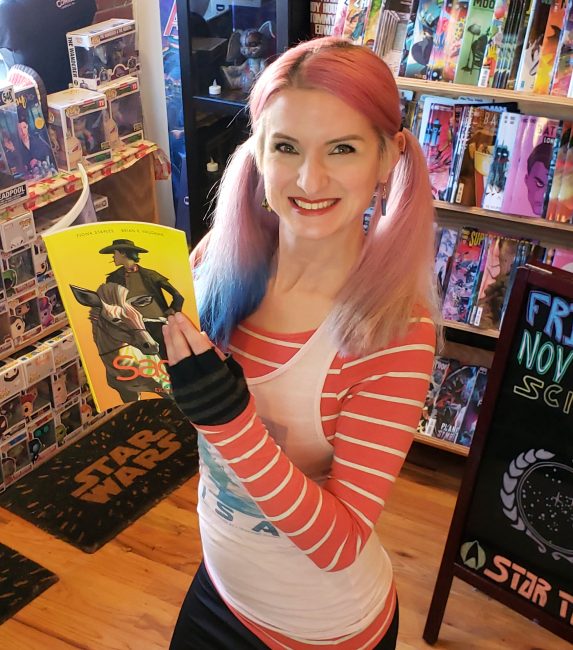 Morgan Albritton, the owner of Morgan’s Comics in West Asheville, is honored to be a keeper of stories. While growing up in Gainesville, Florida, a city associated with alligators, oppressive heat, and gigantic mosquitos, Albritton found an escape in comic books. Albritton’s father is a minister and after a strict religious upbringing, she found herself at a crossroads with God. While sorting out her beef with him, graphic novels, science fiction, and video games consoled her. They allowed her to mentally detach for a point in time and hit the reset button. After relocating to Asheville, Albritton was shown a new path. Through a series of comic book worthy-circumstances, she inherited her store, Morgan’s Comics, which has since kept her young. She is currently the only female comic book store owner in Western North Carolina, a title that drives her to make it cool for other women to come out about their love for the genre. Following the saying, “Write what you know” Albritton took a chance as a first-time storeowner trusting that her passion would translate to profits. Morgan’s has since become a community favorite, offering neighbors, young and old, a space where geekdom is celebrated. Despite the crazy hours, battles fought, and the at-times minimum wage income that it took to maintain Morgan’s, it has been worth it. To be able to sell nerd swag—and have customers who openly appreciate this service— reminds her why the store exists: to provide a hang spot and healthy way of checking out from real life.

What was your first career?

I was a salon/spa manager and events planner for 11 years, which I enjoyed for the theatrical element and the fact that you can go from crazy nerves to celebrating in seconds. It also taught me that the only consistency in life is change so you have to be malleable. Weddings taught me to how to roll with the punches. Just like a bride doesn’t want to remember that it rained on her wedding day, the industry taught me to focus on the good. I’ve applied that same mentality to our store. I have been learning how to do everything on the spot, from day one, and we’re still here. (Laughs)

How did you find Asheville and make it your adopted home?

When I was in college, my best friend moved to Asheville after graduating from massage school. She heard this was “the place” to go. I came to visit and ironically, ended up staying whereas she moved to the West Coast. West Asheville, in particular, felt like home right away. It wouldn’t be abnormal to see someone walking down the street in a Pikachu onesie.

You mentioned that Morgan’s was inherited. How did this happen, exactly?

After I arrived in Asheville while managing a salon and spa, I also built a successful business as a wedding events planner. Out of nowhere, the person I was working for decided to eliminate my job at the exact same time I was remodeling my house. The loan people said to me, “You have to get a full-time position somewhere, within 3 months or else!” I took my daughter to day camp every day and went immediately to the unemployment office afterward to fill out applications. Finally, someone tipped me off to the fact that a comic book store, run by someone in the video game business, was opening in West Asheville. It was a shot in the dark however, the original owner asked me to take a “nerd test,” which I aced. I even included a quote on it from Simon Pegg that said, “Being a nerd means never having to play it cool about how much you love something.” They immediately offered me the job.

Yet, it wasn’t all smooth sailing I am guessing if he ended up giving you ownership?

Right. The original operating owner’s staff warned me that he was creepy and weird and over time, he became more and more manipulative. He also told me that he didn’t care about comics at all but rather, money. His investor business partner openly knew very little about the nerd world. He owned several successful businesses in town and preferred to fly planes or ride Harley-Davidsons in his free time. In short, his mission was inauthentic. After a falling out between these two men, the investor owner agreed to give me partial ownership and changed the LLC to “Morgan’s Comics” without asking me if I was okay with the name. I had to roll with it and also work my butt off to learn the business side of comic books. Fortunately, loyal customers taught me how to operate Quickbooks in exchange for Zelda comics. Shortly after, I met an amazing woman who became my silent business partner and gave me the money to gain full ownership.

When did you realize that it was unique to be a female comic book store owner in the States?

One of my customers whose kid had been collecting My Little Pony’s came in one day. She said, “Through my research, I am proud to share that you are the first female-owned comic book store owner in Western North Carolina.” She knew that I loved Mr. Rogers and compared the selfless work I was doing to him. I got a tattoo of Mr. Rogers and Wonder Woman shortly after to remind me of why I will keep on fighting for this space: so my customers can immerse themselves in a colorful Nerdom environment that gives them a vacation from their everyday life.

What is it like to offer people a refuge where they can bond over a mutual love for comics?

I have been in snooty, elitist comic book stores and wanted to make Morgan’s the exact opposite. That is why our tagline is, “Welcome to the nerd sanctuary.” I used to say it to people as they walked into the store to which some would say, “I’m home!” From the t-shirts to the sign on the façade I made sure that slogan was everywhere. I also was always uncomfortable with having the store named after myself, which is why I made the “Morgan’s” smaller and “Comics” bigger on our sign; less about me and more about offering a fun, safe sanctuary.

How have comic books helped you to get through more troubling times?

Reading comic books brings me a huge amount of joy as does hearing my customer’s perspectives on them. The feel of an author’s work is so different depending on what artist they are working with. When you find that right pairing, you emotionally connect with their characters. I love becoming invested in a story and absorbing the crisp, clear artwork. That experience makes my heart really sparkly and I am so happy that I can offer it to others. I just love learning vicariously through tales.

I also think it is very noble to offer adults a place where they can be childlike and play.

Exactly. Comic books allow me to take a step away from whatever situation is taxing me. It’s similar to the refreshing effects of a good night’s sleep. Too much focus is placed on being a grown-up and worrying about money or the size of your house. Small or significant, I hope this store brings people joy and reminds them of what is important.

What about Asheville do you think has made your store successful?

The more colors there are, the more interesting the palate. Asheville is a city filled with different people, artists, and business owners, which makes it feel like a rainbow. That variety also attracts a crowd of people who appreciate diversity. If you keep making a city intriguing, versus generic with Mc-Mansions and Walmarts everywhere, then it will retain its character. If there were more cities like Asheville, with tons of different art and unique businesses, then maybe people would feel younger, lighter, and brighter. I feel so lucky and grateful to own a business in a city that I love in the middle of my favorite neighborhood. How did this happen? (Laughs)

Your Bio is Everything. (And if you think it’s not you’re wrong.)