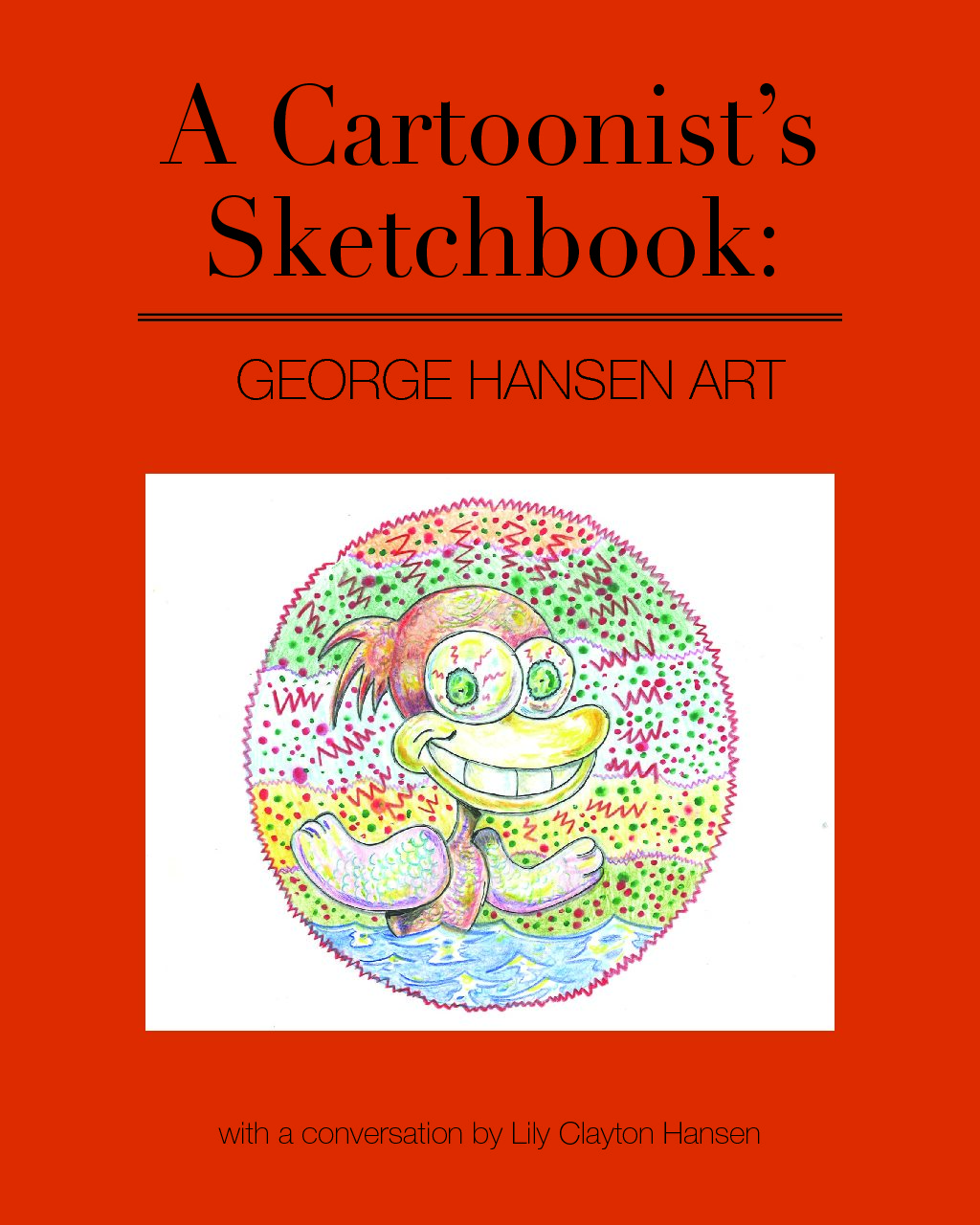 “This is my 60th year of being a published cartoonist. Art, and underground comics in particular where no one was editing you, is total freedom to me.” —George Hansen

For quite a while, my dad, cartoonist and blues musician George Hansen, and I have discussed collaborating on a project together. Since my childhood, we have sung and danced, drawn, and written stories (which he usually took the lead on illustrating.) However, we could never quite decide on what it was that we wanted to do. “Should we finally write that children’s book we’ve been talking about?” “Maybe.” “Do you have an idea?” “Not a concrete one.” “Yeah me neither.”

This is how the conversation went on for years.

That is until 2020 when I visited my dad in the midst of the pandemic. While sitting on his front porch, I asked if we could revisit some of his recent sketchbooks. While my dad became very well known in the underground art world in the 1970s creating and publishing comics like Hard Times, Hot Nuts, Let’s Not ‘N’ Say We Did Funnies, and Like Nobody’s Bizness I was drawn to his latest colored pencil drawings. They still had the same wit that he had become known for while gracing hundreds of magazine and record covers with his cartoon drawings. However, these images were a little softer. They had a sweetness that I thought might appeal to both kids and adults. Most importantly, my dad was very proud of them. As he told me, “I really feel like I hit my stride as of late.” (This is also thanks to one of his best friends, painter John Kurtz, who encouraged my dad to continue to explore colored pencils as a medium.)

So, I popped those two sketchbooks into my suitcase and sat in my apartment the following week meticulously selecting which images to include in our book. Rather than a children’s book, I thought it might be cool to replicate his sketchbook with a Q&A interview at the beginning about his process. Underground comics had once again made it into the public consciousness because of wonderful exhibitions at institutions like the Museum of Contemporary Art. It seemed like there was no better time than to release a book of my dad’s work as he has been a force on the Chicago scene for decades.

After spending hours scanning his images at Kinko’s, making their manager into my new BFF, I had the great privilege of being able to interview my dad. Too few kids ever get a chance to see their parents as human beings let alone artists in their own right. While I had always been privy to my dad’s process, as he obsessively sketches the world around him, it was completely different talking to him about his craft. I walked away with even greater respect for how dedicated he is to constantly improving through hard work, and studying the masters from Renaissance-era painters to classic comic strip artists.

Yet, beyond the shop talk I agreed with my dad’s mission behind the book: to encourage young kids to create art, particularly at a point in time where they can too easily succumb to the imagination-zapping allure of technology. My dad, similar to myself, says “thanks” to the universe every day for providing him with parents who encouraged his talents. Our hope is that this visual book brings joy to the reader, plants a much-deserved smile on their face, and enthuses them to define their own style. As my dad says, “There’s no better feeling than seeing the previous day’s sketch on my drawing board, which I keep there to inspire me to continue to create.”

Check out the book here and consider buying a copy for someone who needs some inspiration! Below are some of my favorite quotes from our interview. A huge thank you to one of my best friends, designer Marissa Antkowiak, for putting this book together.

What advice do you have for young artists, and kids in particular?

Copy the kind of artwork that you really like. This allows you to develop a foundation and yet also, work towards cultivating your own style. Classic comic book strips have influenced me the most. As a kid, I would study Walt Kelley’s “Pogo” and Will Eisner’s “The Spirit” very carefully from frame to frame. Trying to figure out how they created the exaggerated features, the way the characters walked and talked, and expressed their emotions inspired me to begin incorporating panels into my work, which has always been my signature.

What do you love most about the creative process?

Everything fascinates me and I enjoy capturing what I see in my art. I love each and every day and am always noticing new things. My eyes are always darting around to pick up on the beauty of the sky, the clouds, vegetation, and so forth. Certain times of the day, where the colors change in the sky, and the trees all influence my work. Drawings keep me paying attention to the beauty I see around me.”

You have a very loyal following and post often on Facebook. How does it feel to get a positive reaction to one of your drawings?

It is the best time of the day when I put a drawing out and people really seem to enjoy it. That is part of the reason that I do what I do. I try to get better and better each and every day for that very reason. I don’t think anyone should be in the arts for money but rather for the love of it. Although, it does feel great when your audience appreciates what you do.

How do you learn from your mistakes and not let them hinder your confidence?

I try to learn from the mistakes that I make and keep moving forward. There are pages in my sketchbook that I have never finished. Sometimes I’ll go back and try to figure out what went wrong. Then, I move on to the next drawing. In a way, it drives me to improve, which is most important in the act of creating.

What is the best piece of advice that you were ever given?

When I used to freelance at commercial studios, I realized that I never fit in. But, like my dad said to me one day, “Once you know who and what you are the rest is a piece of cake.” I used to get bored when I would go to parties as a teenager because I wasn’t good at small talk. I just wanted to go home and draw, read, or play my instruments. Don’t focus on trying to fit in but rather doing what you love.

What do you enjoy most about cartooning animals, which are a big part of this book, as opposed to say, people?

Whether it’s in children’s books, animated cartoons, or films, animals are always something that I noticed straight away. I find drawing people to be kind of boring versus little characters, which give you the freedom to do what you want. That freedom is most important to me.

The Breaks of Being a Starving Artist