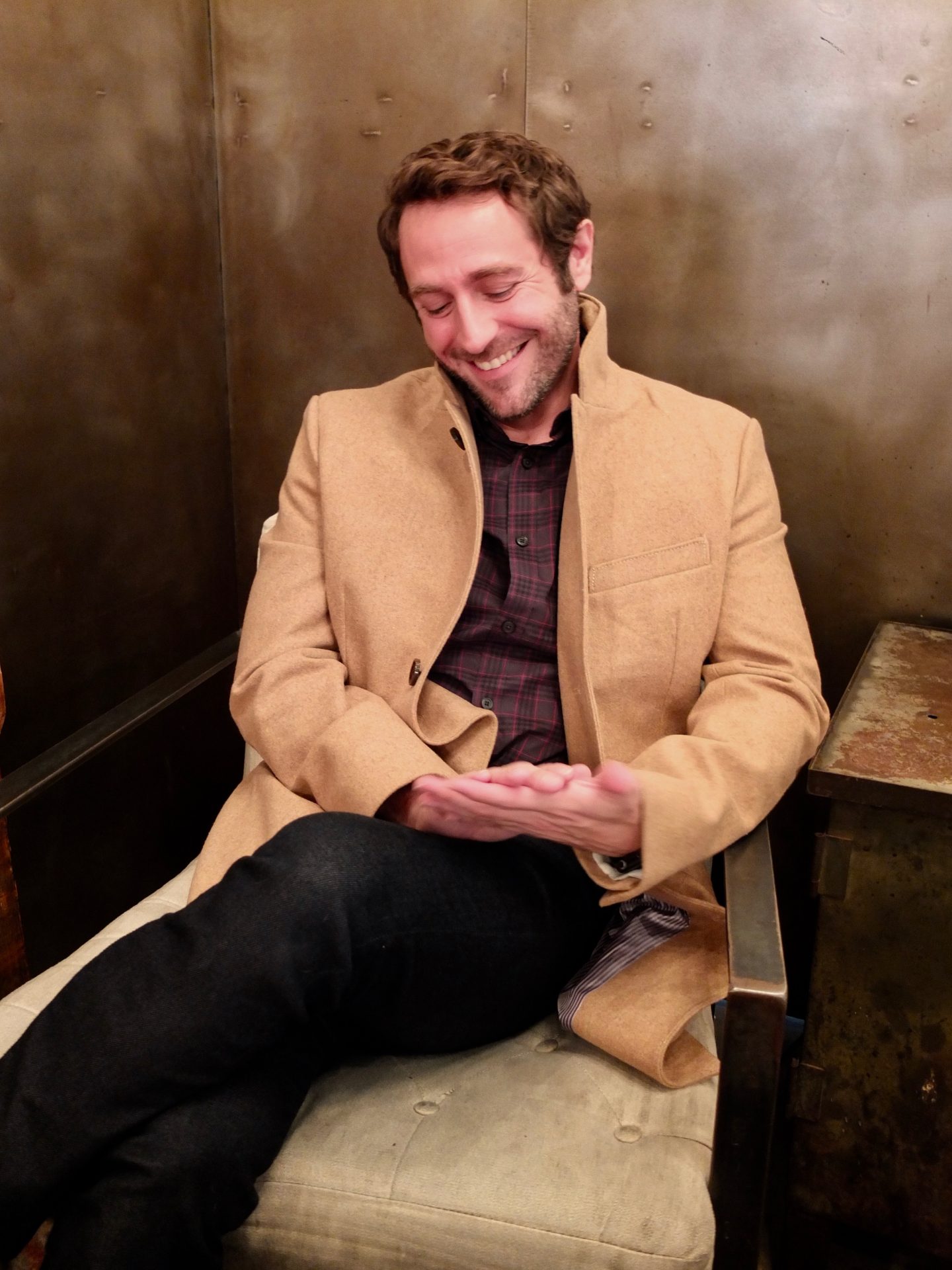 Casey Aud is an actor, screenwriter, and director based in Nashville, Tennessee. He is represented by The McCray Agency and has been acting professionally, primarily in film, for four years. Casey and I chatted one day at Pinewood Social, where he used to work, and first started having conversations about the idea of becoming an actor.

Casey and I first met in an improv class, taught by actor and instructor Brandon Gibson. I was incredibly impressed by his natural talent, professionalism, ability to be in the moment, and most importantly, humility. I still remember when chatting casually one day, I asked him about the origins of his acting career. As a burgeoning actor myself, the words he said both rang in my mind and also eased it: “I’m so grateful I didn’t get the bigger jobs sooner because I wasn’t ready.” Here is an open, honest conversation about being grateful for the little things and knowing yourself well enough to understand when you’re ready for the big ones.

Just to start the interview off with a slightly random question; do you think the best actors are incredibly honest people? Perhaps, almost to a fault.

Casey Aud: Yes, and I think that my honesty comes from having an overdeveloped conscience. I can’t lie to people. I can’t lead people on. I will lose sleep over it at night. I believe in saving yourself a little time and trauma and just being transparent. I also believe in being yourself. If someone doesn’t, then cut the loss. There’s no sense in trying to impress others by being inauthentic. You do so much pretending as an actor that, in my downtime, I cannot front.

Can you tell me a bit about your background?

CA: I was born in Louisville, Kentucky. My dad was attending dental school and we later moved to North Carolina where he joined the army, Tennessee, and the foothills of the mountains in Virginia as he looked for the right location to open his dental practice. We were dirt poor and it was one of the hardest times in our life. As kids, we played on the railroad tracks, in ditches, and springs that had poisonous snakes in them. Eventually, we moved back to Owensboro, Kentucky, a small city with a lack of a thriving arts scene where everyone knows each other. As a creative person, I felt like I was drowning and also a bit isolated there. In a lot of ways, I felt like it was a road to nowhere.

So, what did you do to change your situation?

I started traveling a lot in high school and would go see the band Phish a lot. Being exposed to new cities and different groups of people shaped me as a teenager. But then, I would go back to Owensboro and feel unsatisfied. From there, I went to college where I studied psychology and went to work for a mental health agency as a direct care staff afterward. I was a live-in caretaker for dual-diagnosis individuals, who had a spectrum of disabilities, and took care of all of their needs. I administered medication, cleaned their home, cooked their food, and helped them with their hygiene. Once I graduated, I became a social worker for that same population.

I worked at a rehab center and understand how heartbreaking those jobs can be.

Absolutely. It was especially tough to read case files and learn about the patient’s abusive childhoods. While I actually enjoyed being a social worker, I also entered into one of the darkest times of my life while in that career. I went through a divorce and worked in a basement office where I literally did not see the light of day. I was completely overworked and utterly unhappy in almost every facet of my life. I started writing for a magazine and the agency I was working for at the time wasn’t cool with that. It was literally the only thing that made me happy and, once that was taken away, I would sometimes lie in my bed at night and pray that I would not wake up the next day. I didn’t want to face the next day because nothing brought me joy.

What turned things around?

I started making changes so I wouldn’t feel like that anymore. One major move I made was visiting friends in Nashville, a city that I truly love for its energy and plethora of opportunities. After some internal debating, I put my house up for sale and moved here. Finally, after a few unsuccessful service industry jobs I landed a gig waiting tables at Pinewood Social, where I finally felt like I was in my element. There were all of these creative and entrepreneurial types coming in and every staff member was an artist in one way or another. One day a musician friend asked me, “What do you want to do with your life?” I had a few coworkers who suggested that I try acting and I ended up getting some headshots and signing with my current agency, The McCray Agency, a few months later where I have now been for four years. It’s still kind of amazing.

What were your next steps in pursuing your acting career?

I took some improv and acting classes, which I would recommend to any actor. I also auditioned for some bigger parts, which I am grateful I did not get because I wasn’t ready.

You listened to yourself and trusted your instincts.

I wanted it and, at the time, I thought I was ready but I sure wasn’t. (Laughs) I didn’t have the training or the experience on set. The turning point in terms of my confidence being boosted was when I started taking acting lessons at The Nashville Acting Studio, owned by Caroline Locorriere. She has been such a Godsend in terms of my acting technique, set etiquette, knowing how to interact with other actors, and understand the very complicated industry itself. Now, I am so much more confident and comfortable auditioning and feeling ready for big jobs.

Being on set has also given me the confidence and experience that I need. I have done two films on my own, one for the 48-Hour film festival that I directed and acted in. Directing and writing my own short films taught me how to be a better actor because I understand the process.

Can you explain that further because I feel that, unless you are in charge of your own project, you don’t really know how much goes into every role on set?

Once you’re in charge, you realize how hard everyone else has it and have a new appreciation for their role and how important it is to the entire project. It also made me more appreciative in terms of getting any role at all. Whether it is a small part in someone’s short film or a larger role in a major motion picture, I am equally appreciative because that is someone affirming my craft. They trust me to carry out their vision and do what I love for them. Someone putting their faith in me is the best.

Plus, a positive attitude creates a great set!

Exactly. Bad behavior and complaining spread like a virus and before you know it, there is this wave of negativity. Onset, while everyone is individuals in their own right, we should all work towards a common goal. Negative vibes affect the whole production. Conversely, I always try to be kind, polite, and gracious.

What do you love most about acting — especially, since it is your second career?

There is no better feeling than to be offered a job because someone liked my work, whether they saw it in a film or an acting class. To have a director say, “I trust you to portray this character because I know you’re going to do it justice” is gratifying and very validating.

When did you first feel like a real actor?

Even though I have been acting now for four years, it’s only been two that I’ve been comfortable calling myself an “actor.” Before that, I just couldn’t do it. Still, having grown up without any money and having to buy the generic everything makes me so appreciative of any success—and taught me to always have humility as well.

So what does your family think of your success? They must be so proud.

It took them a while to get a grasp on what I was doing and the fact that I am actually an actor. However, once I booked a few jobs they could connect with, it was amazing to hear them say, “You’re an actor now.” They were always proud of me but those jobs validated my career in their eyes. I think they believe in me now, which is cool. {Laughs}

Right now, I’m looking forward to finishing my work on the feature film “The Third Saturday.” I also have three short films booked for early 2021. My goal for this year is to book a recurring role on a television show.  I would also like to fully support myself with acting.

Here is a link to Casey Aud’s IMDb page

Hire Lily Clayton Hansen to write an interview for you here