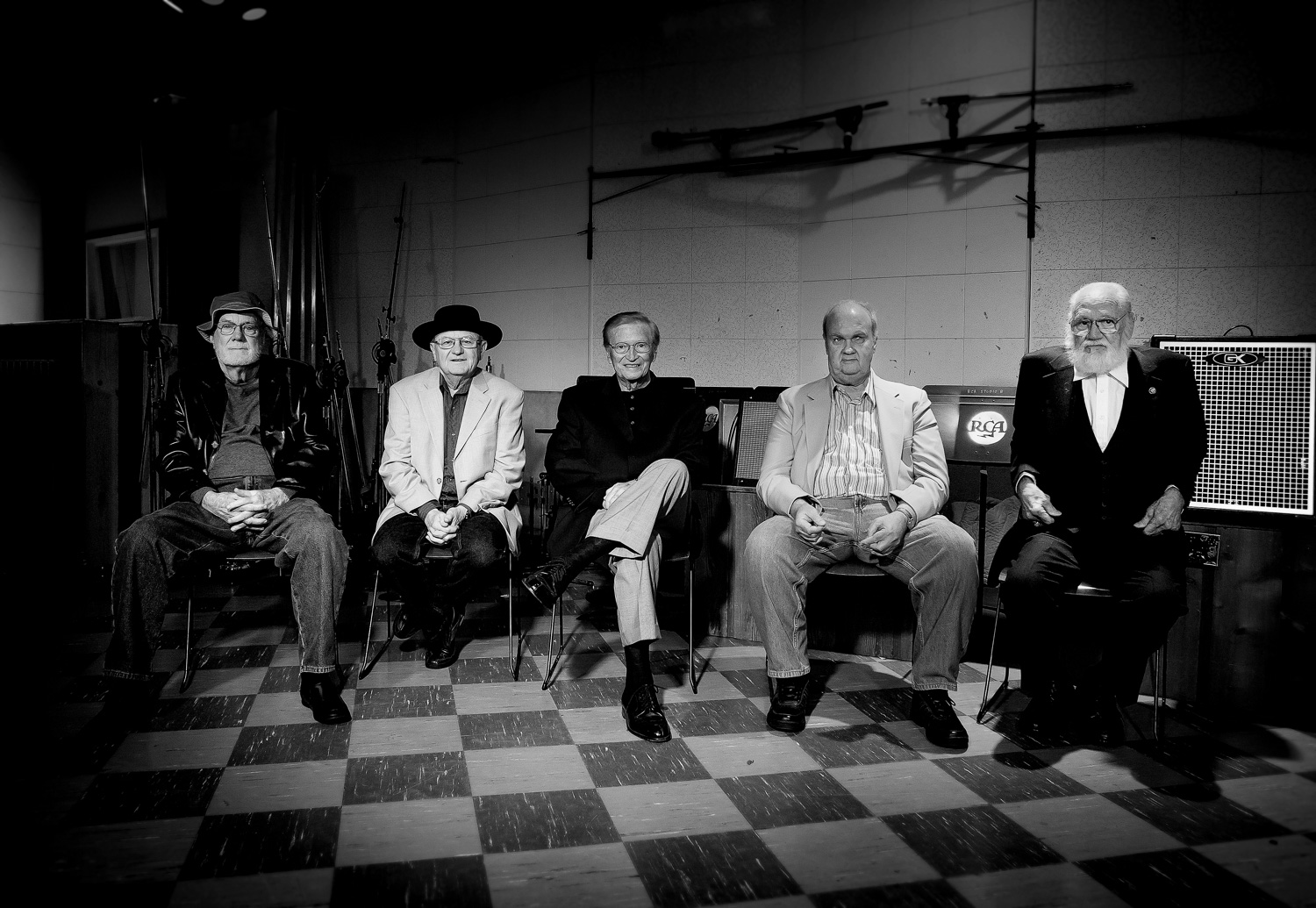 During the 1950s, 60s and early 70s an elite group of session players, The Nashville A-Team, clocked in every day of the week at RCA Studio B and Decca Records. Working on Music Row with producers Owen Bradley and Chet Atkins, the 12 original members recorded religiously with the world’s biggest stars.

Guitarists Harold Bradley and Ray Edenton, harmonica player Charlie McCoy, bassist Bob Moore and pianist Hargus “Pig” Robbins are the five surviving members (pictured above.) They famous orchestrated the “Nashville Sound.” Looking around the historic Studio B, Edenton and Bradley guesstimate they’ve recorded a thousand sessions here in between carousing, playing gigs and chasing after beautiful starlets. Though the members has since gone their separate ways they can hardly remember a day before bringing their a-game to the studio. Bob Moore, who is credited for validating the bass as a country music instrument, laughs: “I guess I’ve known these guys forever.”

They recall Dolly Parton’s first day in town, a young Willie Nelson in an unlikely suit and tie combo and of course, Elvis who “worked extremely fast and was a lot of fun.” The A-team were opinionated, relentlessly hard working (they often slept underneath pianos and on studio couches.) They wholeheartedly gave themselves over to the music.

“It was like going to a party with Roy Orbison, Brenda Lee, Elvis Presley,, Loretta Lynn, and Roger Miller,” explains rhythm guitarist Harold Bradley. “Most of the time it didn’t seem like work.”

Individually the members have contributed to tens of thousands of tracks and together they were the tightly knit troupe favored by Elvis, Patsy Cline and The Everly Brothers. Prior to computers, overdubbing and headphones the musicians rhythmically read one another’s minds and played by ear. They admit to being creatures of habit and preferring studio work to live performance. Guided by their ability to read another’s next moves, the A-Team became coveted for their chameleon-like ability to fluctuate between country, gospel and rockabilly. (Sometimes in a single day.) Even Bob Dylan gave them the liberty to add their own flair to one of his most famous tracks, “Lay Lady Lay.”

“Some of the best things ever that happened were mistakes” explains McCoy, the youngest of the bunch. “The producers I worked with always made it clear to express myself.”

Although the men admit they couldn’t predict the hits, every once in a while a song would be impossible to forget. If they really liked a song, they would sing it every day and night. Still, as Bradley explains, “The A-Team was a piece of clay that molded in the direction of the musician. When he was lucky, and allowed to be himself, the great songs were produced.