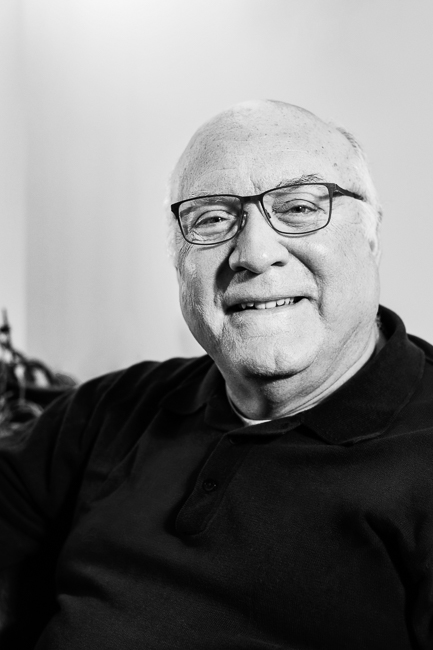 Even as someone who’s written professionally since my early twenties, grammar has never been my strong suit. As a creative writer, I’ve always been most interested in storytelling and capturing the vibe of my subjects.

This is why I have the utmost respect and admiration for Joe Diorio, writer, editor, and brains behind the terrific newsletter A Few Words About Words. Joe, a grammar aficionado, is passionate about all of the things I am not. Whereas I care the most about connecting with subjects, his skin crawls when he sees a misplaced comma. Our mutual love for the written word, yet different ways of approaching it, is why we became fast friends after he introduced himself to me on Linked In asking if he could interview me for his newsletter. The topic, like all of Joe’s musings, was clever: he wanted to talk about the continuous use of old terminology like “dialing a number” and “rolling down windows,” which clearly, because of technology, are both impossible to do these days. While my thoughts didn’t make the newsletter’s final draft, we kept in touch and sat down a few months later so I could learn more about why bad grammar grinds his gears. What I learned is that Joe moved around a lot as a kid, which impeded his ability to study as intensely as he wanted to. He’s spent the last 50 years trying to prove to his grade school teachers that he know what he’s doing when it comes to putting pen to paper. And he does. His newsletters, stylish, succinct, and smart, are aptly called “copy for grown-ups.” They showcase a voice that has been developed over decades and desire to give readers what they want: thoughtful and well-researched articles about really irritating grammatical faux pas. Joe, just so you know, a lifetime of studying English grammar did pay off. I, personally, am thrilled someone is giving grammar the attention it deserves.

What is your favorite skill?

Writing simple, declarative sentences. And since I use a dictionary, I almost always spell the words correctly. (Laughs)

Have you ever solicited your freelance writing skills?

No. I never ask anyone to hire me. By the virtue that I am a freelance writer and am putting out a newsletter, then hopefully when someone needs a writer, they’ll think of me.

Did you always realize the power of words?

Yes. I have sat in on faculty meetings, while working in higher education, where they debated the definition of a single word for hours on end. A simple phrase or word choice makes a difference. Here’s a great example: a few years ago, I decided to no longer drink alcohol. I did it strictly for health reasons. In social situations nowadays I say, “I don’t drink” instead of “I stopped drinking” because if I say the latter people inevitably assume I had a problem. Words matter!

Why did you start your newsletter “A Few Words About Words?”

I worked for ten years as a freelance copywriter and wanted to find a low-key way to keep in touch with prospective clients. I actually started the newsletter 28-years ago. It was paper-based and I processed it at home, stuffed it into envelopes, and sent it by snail mail. When I stopped freelancing, the newsletter too went away. A few years ago, when I retired I recreated it in a 700-word, email-based format. It started off with 1,200-recipients and is now up to 6,000, which I’m excited about. I send it out monthly because I don’t want to pollute someone’s inbox. I hope the newsletter appeals to anyone who cares about the written word.

You are a big believer in using Linked In as a marketing tool.

Yes. I do ten requests a day by looking through the “People You Might Know” section and sending out short notes asking, “Can we connect? I’m the author of A Few Words About Words and am trying to grow the circulation.”  It’s an invaluable asset.

What’s the best compliment you’ve received in regards to your newsletter?

I’m a member of the International Association of Business Communicators (IABC.) At the end of a meeting someone came up and asked me, “Do you write A Few Words about Words? That’s a must-read for me.” I was flattered but also thought afterwards, Crap! I need to keep doing a really good job.

How do you consistently produce great work?

There are a handful of people that I send advance copies of each issue to monthly. I do this for two reasons. One, to proofread the Dickens’s out of it, because typos are like a spear through my heart. Two, it’s also to ask “Is this worth your time?” I never want someone to read my newsletter and think that’s five minutes of my life I’m never getting back.

What’s one of your favorite issues?

I saw a meme on Facebook last year that said, “My eight-year-old asked me, ‘Is it the farmer or the dog that’s named Bingo?’ and now I’m questioning everything I know about life.” I sat back and thought how would you know? So, for that newsletter I diagrammed the sentence “there was a farmer that had a dog and Bingo was his name-o” just to show the dog’s name was Bingo. It’s the simple stuff that people seem to find valuable.

Every January I release an issue called “The Celebration of Festivus,” which is the holiday on the old Seinfeld sitcom where everyone airs their grievances. Well, I save up my grammatical grievances for the New Year and complain about them in this newsletter. One of my biggest is when the news anchors say, “It’s a hundred degrees outside,” instead of “One hundred degrees.” Stuff like that drives me crazy!

We know you love Linked In. What are your thoughts on Twitter?

I closed my Twitter account a year ago and then opened a new one recently, strictly about my newsletter. Since then, I blocked or don’t follow anyone who has crazy extreme political views – on the left or right of the spectrum. I love Twitter now because I use it for professional reasons. If you rely on it for your news it’s similar to that game “Whisper Down the Lane” where you say a statement to the first kid and by the time it gets to the last it’s completely messed up. (Laughs)

Do you have any advice in terms of networking for other freelancers?

I am more introverted than outgoing so I’ve spent a lot of time learning how to network. Listening to people is a huge part of doing that effectively. I wouldn’t connect with someone well if all I did was talk about myself. I try to listen well, empathize, and ask others intelligent questions.

What’s the best advice anyone ever gave you?

“Find your next best self when you step down.” The worst thing you can do is enter retirement without a plan. While I didn’t have a full-blown strategy in place I knew I liked to write and could talk about my topic of choice in my newsletter. When I stepped down from my job at Vanderbilt University as the Director of External Relations, in which I did recruitment marketing, I knew that I was 61-years old and I wasn’t ready to go into another full-time job. That’s when I brought back the newsletter, which grew fast.

What is one thing you’ve learned in recent years?

Someone’s age, especially if they are younger than you, doesn’t prevent them from teaching you something new. I learned a lot from the last employee I had at Vanderbilt in terms of technology. Not to be overly morbid but the moment you stop believing that you can’t learn anything new you start dying.

What is your chosen form of self-care?

I started meditating seven years ago for 20 minutes every morning. For anyone who is looking to try meditation there is a great book called 10% Happier by news anchor Dan Harris about how he got into it himself. I would also tell those who are new to meditation to go for it, don’t worry about failing, and keep at it. Similar to writing, in which there will always be a first draft, you improve over time. Meditation has significantly improved my ability to focus and let things go that don’t serve me.

What do you love about writing?

Writing is about precision, which isn’t natural, and is why I enjoy the challenge of getting it right. In my newsletter, I have made plenty of mistakes and misused certain phrases. After my audience calls me out I’ll say, “Yep you got me! I’ll be more cognizant next time.” I believe everyone can write well but it takes discipline to get there. I’m not a grammarian by nature. I have reference books that I use to double-check my work. While it takes an enormous amount of effort I really love what I do.

Subscribe to Joe’s newsletter A Few Words about Words here

Hire Lily, who has no qualms about soliciting her writing services, here

A Look Back at Sip It! Featuring Graffiti Artist Troy Duff