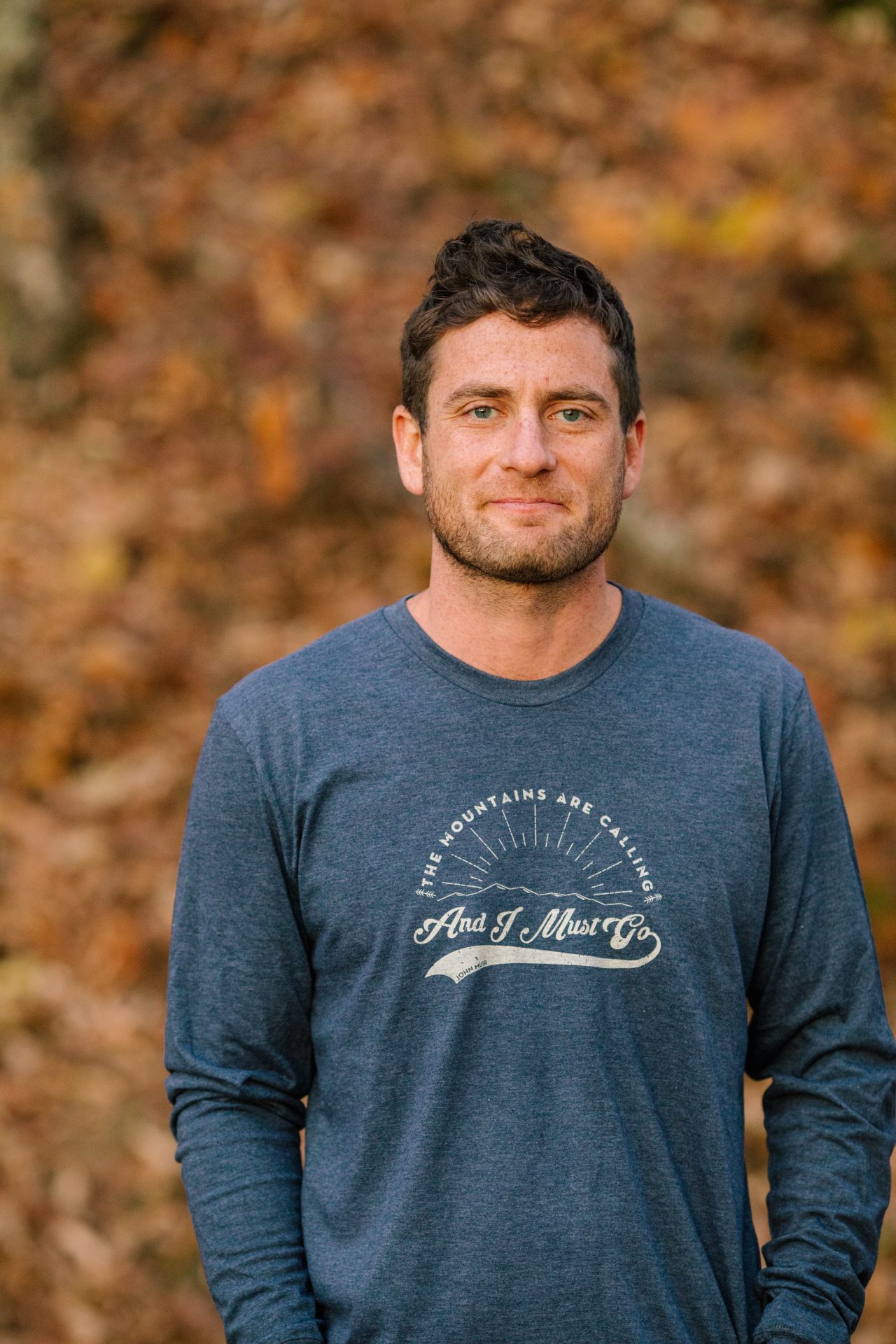 Even after having his first million-dollar year, entrepreneur Evans Prater still can’t bring himself to tell his employees what to do. Instead, the extreme free spirit simply says, “Here’s what needs to get done. I’ll do whatever you don’t wanna do.” By hiring self-starters who fully believe in his vision, Mount Inspiration’s “head honcho” has been able to do the unthinkable: scale his 100% sustainable brand across four stores in two different states—and still, be able to go hiking almost every day. After founding the company in Asheville, North Carolina in 2015, Prater recently opened his first store outside of the city without a hitch. A few months after launching his Boulder outpost, he had ditched the 80-hour workweeks to practice what he preaches: making sure the things that he loves, like being in the great outdoors, always make it onto his weekly schedule. After all his brand is about saying screw you to the man and conventional fare like mortgages. He had better be the poster child for putting heartfelt pastimes first. “I have gotten really lucky in hiring the right people who I believe were attracted to the intrinsic authenticity of the brand and I can trust implicitly,” he says beaming.

Nothing better sums up Prater’s laidback mentality to life than the popular slogan that permeates his clothes: “Relax, nothing is under control.” Swear words, sarcastic quotes, and 100% sustainable practices are the hallmarks of his company. However, Prater’s complete (extreme) commitment to nature, spawned from a life-changing hike on the Appalachian Trail, will always be of the greatest importance. Prater may have a wicked sense of humor yet he is 1000% serious about building a brand around getting and giving back to nature. This may come in the form of one of Mount Inspiration’s many upcycle programs, making a hefty donation to an environmental organization, or inspiring others to never buy another plastic water bottle again. No matter the means, a deep commitment to conservation is woven into every part of his company from the ground up. By factoring in costs for sustainable products from the beginning, Prater cut out any conversations that began with, “That’s too expensive.” Instead, he has been able to fully focus his attention on new t-shirt designs, spreading positive messages around nature on social media, and starting a movement celebrating Mother Earth. By staying true to the simple graphics, principles, and even payouts that made Mount Inspiration successful, Prater has continued to stand out in a hyper-saturated industry.

Where did your extreme interest in the outdoors stem from?

In fourth grade, when the book Hatchet (a classic novel by Gary Paulsen) was assigned, I read it three or four more times than was required. After finishing it, I made my own bow and arrow, which I shot in my parent’s backyard, and constructed a tipi out of saplings. A love for nature is deeply ingrained in me. That passion obviously led to my story, which is dropping out of college, going across the country, and hiking the Appalachian Trail before starting my business. Also, I grew up in Florida, close to the Georgia state line, where people are obsessed with the mountains because it’s such a flat state. My family and I would go on a winter camping trip, as bizarre as that sounds, to North Carolina every year. We’d live in tents in the woods and travel all around the state.

How did Mount Inspiration come about?

I never thought I would end up owning a nature-inspired business. Initially, I wanted to become a travel journalist because I have always loved writing. Yet, I came to realize pretty quickly that was going to be a long, hard road. I didn’t feel as in control of my own destiny as I do now owning my business, which sounds ironic but is true.

Right after I designed my first sticker I brought it to a gift shop downtown. I said, “I have no idea what I’m doing but would you be interested in selling these?” The owner, who is the sweetest lady ever, called a week later to tell me that she had sold through the first ten and wanted to buy 20 more. Over the next month or so, I made more designs: “May the forest be with you,” “Nature is medicine,” and “Be Humble.” From there, as the stickers kept selling out every week, she suggested that I put my slogans on apparel and accessories. I was working as a wilderness guide at the time and so badly wanted to get out of that industry. I thought, maybe I can take this thing to the next level! I had one design that said “Love” with a mountain scene inside of the “O.” Her manager suggested, “Put Asheville beneath that t-shirt design and I promise you, we will sell the shit out of it.” They sold out in a month.

I have always been entrepreneurial but never felt like a businessman. In high school, I burned explicit CDs for friends at $10 a pop. I also had a fake ID and would buy other kids alcohol and upcharge it. (Laughs) Not the noblest work! In college, I started my own t-shirt line, which became so successful that I was able to quit my part-time job. So, I guess in retrospect I had a business track record even if I didn’t categorize myself in that way.

With so many t-shirt lines out there, what do you think has differentiated you from the masses?

The t-shirt world has an extremely low barrier to entry so the reaction can definitely be, “Oh great, another brand!” before rolling your eyes. After locking down my first wholesale client, Mast General Store, which was a huge score, I went to a similar chainlet to see if they wanted my shirts as well. They wouldn’t give me the time of day. Fortunately, our use of 100% sustainable products and simple designs have always differentiated us. Our primary commitment is to sustainability so I never want the designs to distract from that mission. Plus, if I do say so myself I think our name is one of the best in the business.

How did the name Mount Inspiration, which is super catchy, come about?

The original idea behind the brand was to use popular inspirational quotes from famous writers like Ralph Waldo Emerson. The original LLC is a play on words: “Mountainspiration.” However, when I started taking my shirts to festivals people would constantly mispronounce the name, which is when I thought this doesn’t work and decided to separate the words and drop the “a.” It stuck!

What is the feedback you get most from your customers?

The feedback I get most frequently is, “I want to support you.” I bend over backward for my buyers, which they appreciate. I realize there is a lot of competition in this space and will do customization without charging extra or asking for a minimum, which is rare. If it takes me a few extra seconds to stamp “Greenville” on a shirt then why not?

Did you ever find it daunting to maintain such a strict commitment to sustainability?

The whole outdoor industry is 100% committed to sustainability, including huge corporations like REI, so that’s never been a question. When I got started, I didn’t know that much about business. I thought if I’m paying $6.75 for a t-shirt and selling it for $13.50 that’s pretty good because I’m doubling my money. I also don’t know what other entrepreneurs pay themselves but this has never been about money. I still try to pay myself as little as possible so we can do the right thing. I built myself a bedroom in the office at our Boulder store. I also have vans that I can sleep in if need be, and a backpack with a hammock and a tent. I’ve been crashing at our West Asheville store since opening it. I don’t need that much and am 100% focused on making Mount Inspiration a success. That intention, and being able to give money away to environmental advocacy groups, is most important to me. Our integrity, positive work environment, and customer service has and will always make us successful.

You are a real free spirit who took off to hike the Appalachian Trail and has lived off the grid. Does owning your own business ever feel confining and too “routine?”

The entrepreneurial life offers enough plates to spin so I never feel trapped. When I first got started, I had a little 10×10 storage unit where I would screen print and tag everything. I worked from a coffee shop in the morning. Then, I drove to Black Mountain with my wares and tried to drum up sales. If I wasn’t going to a festival on the weekends, I was flying to a trade show. That had enough variety to scratch the wandering itch. Owning Mount Inspiration has been a grand adventure in and of itself. It’s like an Appalachian Trail that has no end.

What do you think it is about Asheville that has helped you to be successful?

There are a lot of resources for entrepreneurs like the Outdoor Gear Builders association, Million Cups of Coffee, a national organization whose Asheville chapter I have spoken at, and the Elevate Program at the Chamber of Commerce. The amount of support here is off the charts and unique to the city. It’s just wonderful.

With four businesses, how do you get everything done and still have a life?

A lot of people think that I work 100 hours a week but the beauty of building a brand about enjoying life is that it reminds me to maintain a healthy balance. When you have a brand that touts that mentality then others expect it from you too! (Laughs)