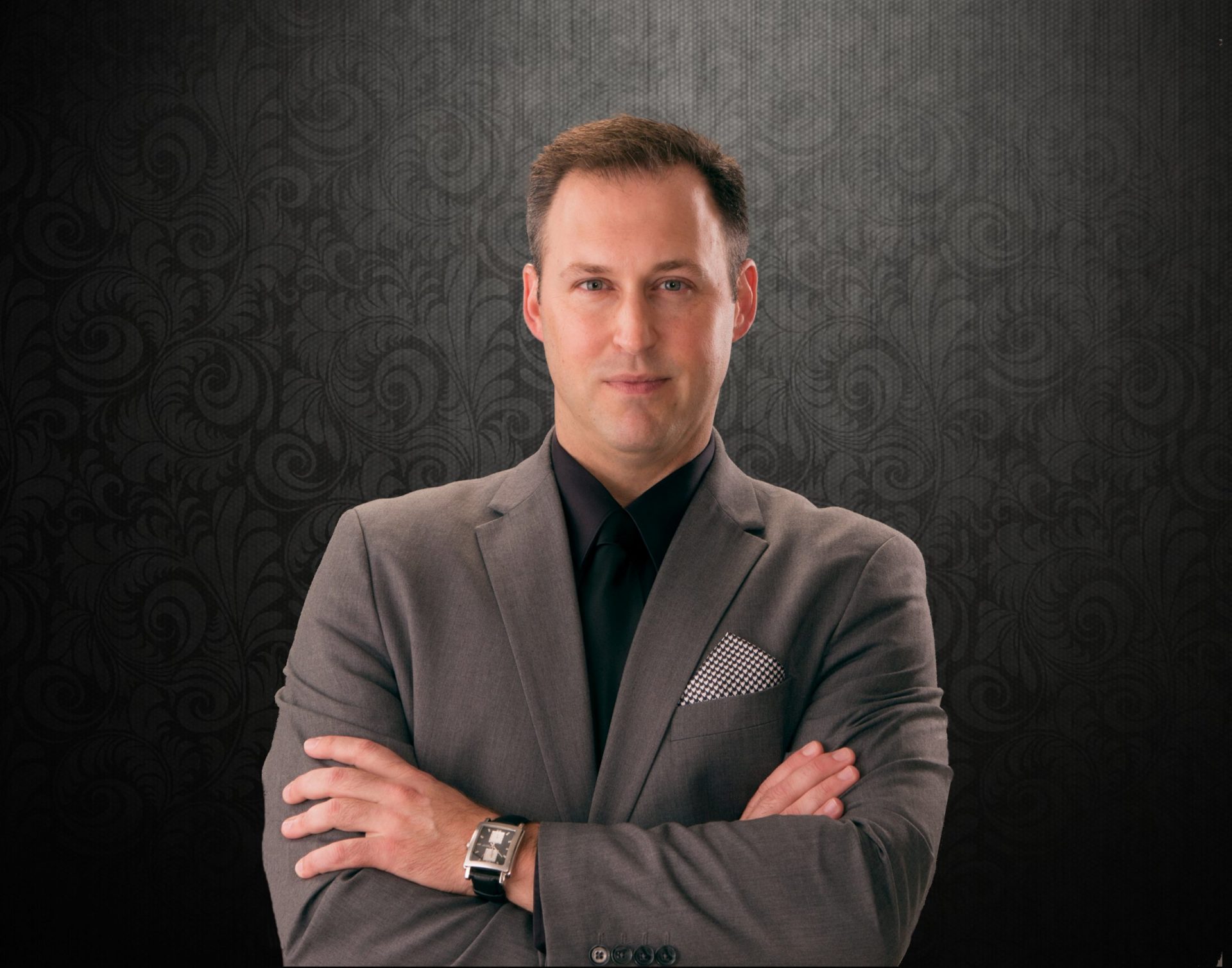 Jason Michaels is an award-winning magician, a motivational speaker, and an author based in Nashville, Tennessee. He and I first met while I was working at House of Cards last year, one of the only magic venues in the country, where Jason served as a performer and Entertainment Director. While sleight-of-hand card tricks is how Jason has dazzled audiences for decades, public speaking is where he has had the greatest impact as of late. Jason has delivered TED-x talks at the Nashville and Chattanooga chapters and speaks around the world about how he became a successful performer despite having the tics that come along with Tourette Syndrome. While he was initially hesitant to speak about his neurological disorder, as it was something that embarrassed him while growing up, he found that it added a new dimension to his live shows and allowed him to connect with audiences more deeply. Jason also innovated the “Live B-I-G System” for college and corporate audiences to help them develop resiliency so they can overcome their own challenges. One day over coffee, Jason, who advised me as I wrote my own TED-x talk, candidly talked about how he found great mentors as a young performer and learned from their constructive criticism. By getting to know himself as a person, spending many hours alone on the road, he fine tuned who he is as a performer. He is courageous and creative when it comes to morphing his career path to suit his personal needs. As I’ve worked through my own fears, I’ve thought often about Jason who fulfilled his aspirations to perform on a large stage, and for the likes of celebrities and CEO’s, even when others told him it wasn’t possible. May his story of resilience, illusion, and innovation inspire you as much as it did me.

When did you first discover magic?

I grew up in Gallatin, Tennessee in a very normal household. My dad was a banker and my mom a housewife. At age 16, two major things happened: I auditioned for a play and was cast in a role and walked into a magic shop where the owner blew my mind. He left me with a feeling of amazement that I wanted to share with people. Little by little, I started to learn magic. I started, like most magicians, with some simple tricks, and never stopped.

What was your first professional job as a magician?

After college, I worked as an assistant for magician Brett Daniels who had a large illusion show in a casino. It was an unbelievable education by one of the best illusionists who was performing at an elite level. That experience gave me confidence that one day I could do what he did. After that contract was over, I moved back to Tennessee where I worked as a bartender and performed close-up magic behind the bar. Finally, I asked the owner if he’d consider hiring me to perform magic a few times a week, which is when I got my first gig during Sunday brunch. Walking from table to table, performing magic, I gained confidence to develop my stage show.

What’s the process like for developing a stage show?

The audience tells you what works. Classic magic tricks like taking a newspaper, ripping it into shreds, and making it come back together are always a hit. It’s why they’ve been around for 100 years.  It’s smart to start with the classics, which you know will get a response, and allow you to focus on your performance style. The hardest thing for a magician is to really listen to the audience and receive constructive criticism in order to make your show the best it can be. The more you perform, and are open to receiving feedback, the better you become at magic.

Do you have any advice for how performers could learn to take constructive criticism better?

I sought out mentors who would give me solid, honest feedback and also understood who I was as a performer so they didn’t lead me down the wrong road. In order to figure out who I was, I asked myself questions like “What is the message of my show? What feeling do I want people to take away from it?” From there, I found mentors who could tell me what technical things were not working and I tweaked my performance based on their feedback. A good mentor should make what you’re working on better and also point you in the right direction to learn new things, but you have to bring work to the table first.

From your experience, is there a certain type of person who is drawn to magic?

A lot of people think it’s a boy who’s socially awkward and is looking to stand out. (Laughs) Magic is actually incredibly diverse. It ranges from a 15-year-old slight-of-hand sensation to an 80-year-old investment banker. Do they have anything else in common? No, but they accept one another because of their passion for magic. They belong to the same club.

You’ve performed for all sorts of audiences. Who did you perform for early on in your career?

Around 2004, I learned that colleges have a student activities board who hire performers to provide safe forms of entertainment. I worked in that market for six years traveling all over the place and performing at all sizes of universities. I would work in a beautiful theatre one day and then in the cafeteria, where people were eating their chicken nuggets, the next. (Laughs) It was similar to working in a comedy club. Coming from a theatrical background, I had to adjust, which wasn’t easy but made me a better performer because I could adapt to my audience.

What is the lifestyle like living on the road?

Not everyone is made for the lifestyle, but I loved the adventurous aspect of it. Performing at universities allowed me to work, get better at my craft, and entertain, which I’ve always considered a noble act because it takes someone away from their problems momentarily. Entertainment allows people to escape. However, what finally motivated me to get off the road was sheer loneliness. I became tired of traveling and eating dinner by myself.

You have been the Entertainment Director and a performer at House of Cards, Nashville’s first magic venue. How did you become involved with the groundbreaking company?

I met the owner Bill Miller through a mutual friend who explained that he was working on a speakeasy concept, influenced by The Magic Castle in Hollywood. As the concept progressed, we kept in touch and he’d occasionally call with questions. I gave him my opinions based on all of the experiences that I’d had. As the Entertainment Director, I developed the layout of the experience. I greatly admire Bill, a true maverick, who was willing to invest in the vision and make it happen. What’s so cool about House of Cards is that most of the clientele has never seen excellent magic before. Prior to visiting, their perception of magic is anything from a birthday clown to David Blaine, so oftentimes, like my first experience with magic, they leave feeling mind blown.

One of your favorite audiences is the military. Why is that a soft spot for you?

Both of my grandfathers were in the military during WWII and I considered going into it myself. When one of my agents asked if I wanted to perform for military audiences my response was an automatic, “Yes!” I’ve performed at continental bases as well as outside of the US. It’s an opportunity to give back and also gives me some insight into what it’s like to be in the military. Especially the men outside of the country are thrilled to have a taste of home. It’s soul giving.

What are you most proud of in your career?

Longevity. It took me a long time to build my business up. To have had enough success to turn this into a career where I am thriving not surviving is a major accomplishment. Also, whenever I stand on a beautiful, state-of-the-art stage and look at the audience I feel so lucky as well.

You’ve done two TED-x talks, one for the Nashville chapter and the other in Chattanooga, and have also spoken around the world. What made you want to be a motivational speaker?

My story is being a kid with Tourette syndrome who grew up to be a professional entertainer. Little by little, over a long period of time I had a friend who convinced me that I needed to share my story with others. My TED-x talk was the first time that I told the world about this neurological disorder that had its grip on me when I was younger. Slowly but surely, I started implementing parts of my story into my shows. I went from being a performer to a real person who could connect with the audience in an emotional way. Today, my mission is to use magic to grab people’s attention so I can share my story to inspire others to overcome obstacles.