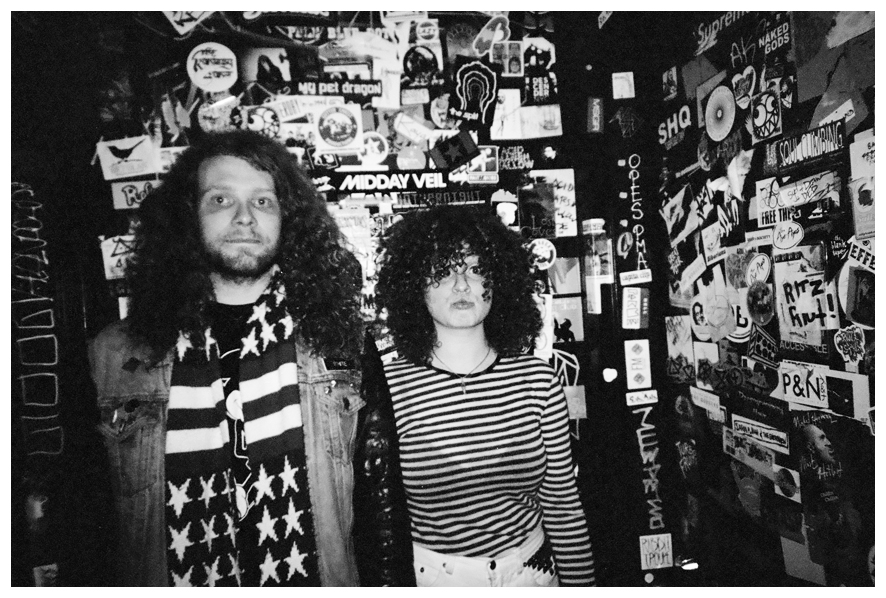 Brother-sister duo White Mystery is light-years ahead of other rock ‘n’ roll bands. The flame-haired, curly-cued Buttheads from Mars were beamed down from outer space, after all. Miss Alex White and Francis Scott Key White have mythologized a universe only they can understand.

“Basically, our mission is to go where no one band has gone before,” she explains.

They are always trying to top themselves, which is why the siblings work fast and furiously. Many of their albums were recorded in a single day. Their 2015 dark, stoner comedy “That Was Awesome” was written, scored, and produced in six months. An epic touring schedule has them on the road ten months out of the year.

Their answer is always “definitely!” to anything out of the ordinary.

In Chicago, Illinois, a city where blues is the backbone, White Mystery officiated a ten-year experiment on April 20, 2008: Is it possible to be an independent rock ‘n’ roll band—and a successful one at that?

Since shaking hands, their adventures have included a sold-out rock ‘n’ roll circus complete with contortionists, acrobats, and ventriloquists. They have performed on a parade float in a parody of “Ferris Bueller’s Day Off” alongside Sir Richard Branson. The musicians have modeled in campaigns for iconic denim brand Levis. Throughout their tenure together, they have been opening acts for Garbage, The Stooges and Weezer.

Nothing intimidates Alex and Francis whose alter egos are named Axel and Fraxel.

Their success is a byproduct of talent, dedication and the countless hours they put into the craft. A White Mystery guidebook embodies their discipline, and mind over matter philosophy—boyfriends, girlfriends, and haircuts are prohibited during the course of their career.

Every year on 4/20, the band releases a new body of music marked by a four-syllable title. These quirky consistencies have made them a cult favorite long after their contemporaries have fallen by the wayside. Media outlets such as MTV, Vice, Sound Opinions and Pitchfork, have praised their eye candy vinyl. On White Mystery, Blood & Venom, People Power, Telepathic and Dubble Dragon one can hear the influences of Patti Smith, The Cramps, and The Who. Their psychedelic, punk rock has transitioned over the years from a guttural, rhythmic sound into a slick precision.

While they are music scholars, the Whites’ childlike sense of humor is their real charm. They are comfortable in their own skin and never take themselves too seriously. 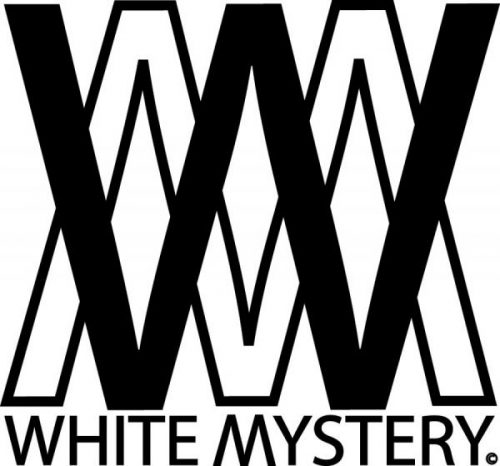 Early on, the free spirits were encouraged to make adult decisions, and walk their own path. There was never any confusion about who they were so they went for it 100% of the time.

Alexandra Brooks White was born on April 30, 1985 at the same hospital as Harrison Ford. Francis Scott Key White became birthday twins with his soon-to-be hero, drummer Keith Moon, after entering the picture on August 23, 1987. The ginger squad has since been inseparable.

They grew up at the Field Museum where their mother Diane Alexander White was a natural history photographer. Early on, Alex and Francis developed their first stage act by jamming on plastic instruments as The Baby Blues.

Diane took them to the dollar store where Alex purchased boatloads of bootleg cassette tapes. The Golden Oldies compilations led to an obsession with 45s, which she started collecting as a teenager at her local record store. Today, she still spins those same vinyl when she DJs. This hobby inspired her to cofound Missile X Records as a teenager with her best friend Chris Playboy.

Alex’s career spans half her lifetime. She has always been able to envision and execute what she wanted out of life.  At age 15, she picked up the electric guitar after hearing The Who and telling her mother, “let’s get this party started!” One lesson later, her first band, the Psychotic Sensations, was formed. By surrounding herself with top-notch musicians, she began to master her chosen instrument: a Fireglo Rickenbacker 330.

As a high school student, Alex released records and toured the states. The morning of her college graduation, the DePaul University business major was on a flight to her first European tour.

Hot Machines, a super group in its own right that Alex formed with friends from the Ponys and Baseball Furies, was her first band to attract major label attention. Next, she shared the stage with dear friend Alisa Dymarets in a two-piece girl band, The Red Lights. Miss Alex White & Chris Playboy followed—the act she credits with putting her on the map. Tragically, Alisa and Chris had untimely deaths, which provoked Alex to put music on pause momentarily. However, dawn eventually followed the dark when she was signed to In the Red Records for a two-album contract. To honor her dear friend and band mate, Chris, Alex made one negotiation—she wanted to release a live album of her last concert with him. Her new project Miss Alex White & The Red Orchestra took songs the two had previously recorded together and turned them into hits. The band achieved commercial success by touring with heavy hitters, like The Black Keys. After returning home, she had the epiphany it was time to join forces with her brother.

“I wanted to go back to the simplicity of being in a two-piece,” she explains. “It’s an easy, cool format if you have a great dynamic with your partner.”

While running the show at Busy Beaver Button Company in her early 20s, Alex first discovered her passion for entrepreneurship. She also realized the power of slogans. “You coin catchy phrases that influence your decision-making, and they literally become a part of your identity,” she explains. While working with major brands like Microsoft, The White Stripes and Missy Elliott, she realized White Mystery could be whatever she and Francis wanted it to be.

In the meantime, Francis was honing his drumming skills and dabbling in garage bands like the Nuke Mutes. He and Alex had previously jammed and recorded together in their parent’s basement —throwing up material on MySpace in the early age of the Internet. At one point in time, they had played in a three-piece called Trash & Heat. Recording project, Forest Bride, served as a White Mystery prototype. 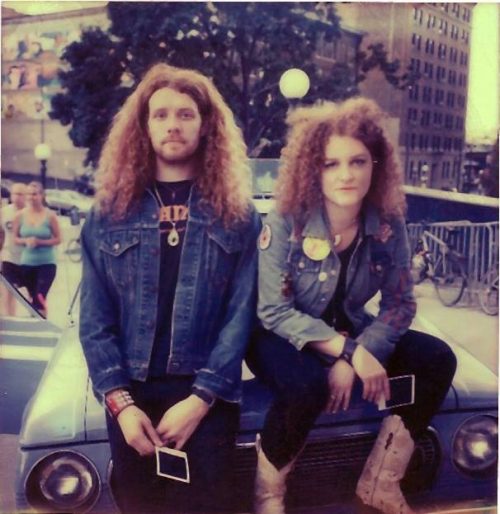 In 2008, Alex and Francis decided to take the plunge and make a living as punk rock musicians. White Mystery became the sibling’s sole focus and magnetic bond. Once they gave themselves the green light, the rest became history: musicians who once dreamed of crossing the border would travel the world many times together.

They quickly realized major labels couldn’t match the speed they wanted to run at, and declared White Mystery an independent act. “It was imperative to retain ownership of our music, and release our albums at a certain time,” explains Alex. “No one wanted to play ball with us.”

So they launched a DIY family affair rounded out by their mom who lent moral support and made all of the merchandise. Their self-titled first album came to life by saving every penny from playing up to three times a week. They stretched funds and brainstormed ways to make a formative impression on the market.

“Can you try this?” answered by, “You mean that?” is how the musicians arrive at happy mediums.

As their album title, “Dubble Dragon” suggests Alex and Francis are artistic soul mates. Together, they make up one superhuman being. Their polar opposite headspaces make for the perfect tension—and hilarious disagreements.

Francis lives in a fantasy world in which he reads and writes for hours. Alex’s feet are firmly planted on the ground, as she is usually running around town. Francis’ dreamy imagination is oftentimes the source of their creative concepts, while Alex’s business mind monetizes their musical talents. He expresses his vision and she executes it. This is best demonstrated in their songwriting system in which Alex adapts Francis’ prose and poetry into catchy pop songs. Even their affinity for ampersands to link contrasting ideas refers to this yin and yang dynamic.

Their creative ebb and flow ensures the siblings always encourage and inspire one another. Even if there was drama over their decade-long evolution one reminded the other, “Dude, we made a commitment to see what happens!”

“Dubble Dragon is entirely a Francis White album,” Alex explains. “It was a real sea change for the band in which I became less dominant and he blossomed into an incredible songwriter.”

By sticking to their guns, they have been able to fulfill their destiny. They always take the road less traveled, and seize new opportunities when they are presented. Until 2018, White Mystery will give their experiment a solid go. After their decade together, only the stars will tell if the siblings will pull the plug or renew their contract with one another. In the meantime, in typical Miss Alex White fashion she finishes, “We’ve accomplished so much, yet haven’t hit our apex yet—there’s still so much more to do!” 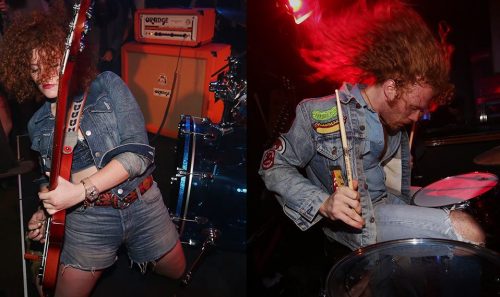