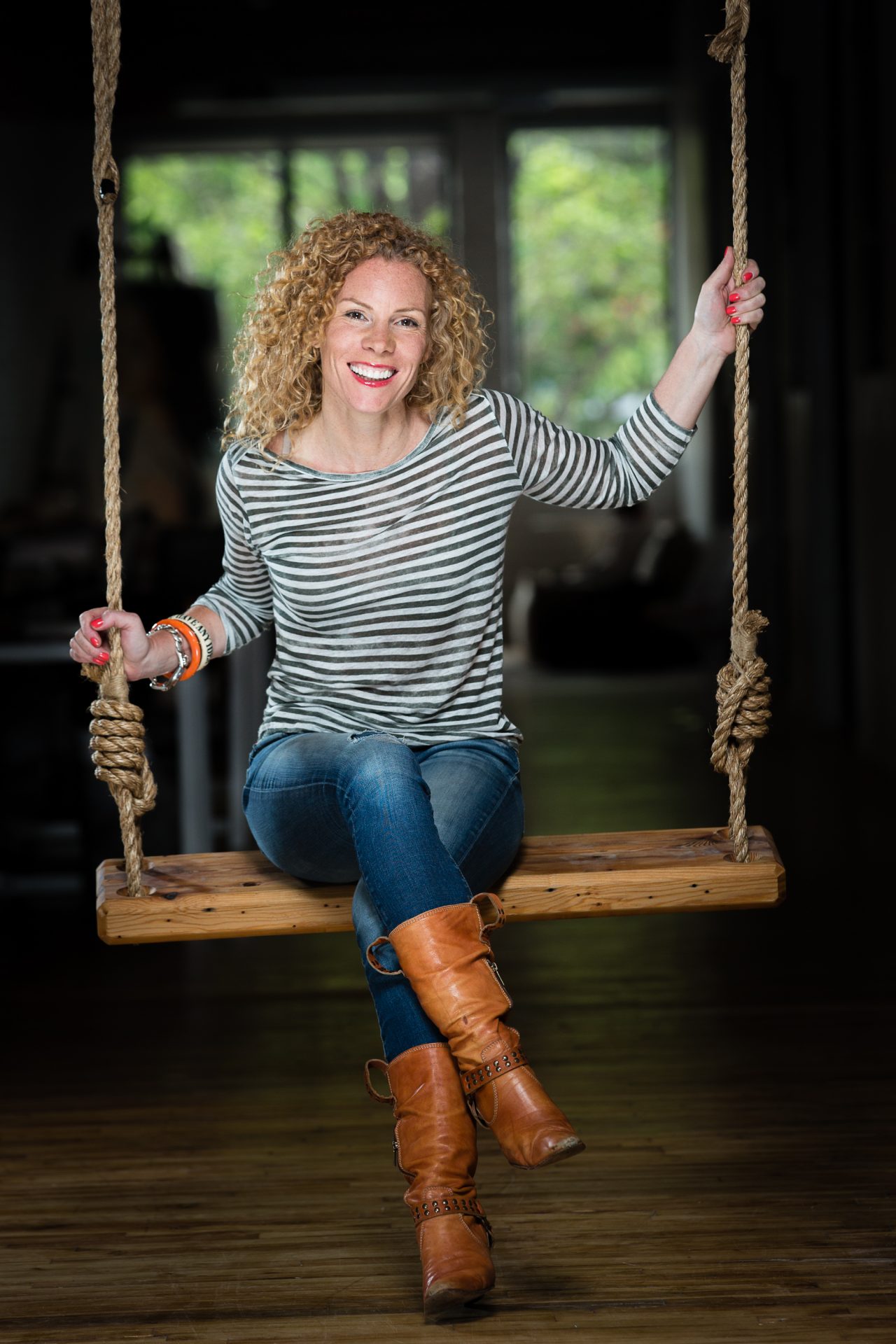 Words like “feel, energy and vibe” come up a lot in conversation with Chicago-based designer Karen Herold. The founder of Studio K is always thinking about how to elicit emotion by means of aesthetic.

The daughter of an architect, Karen has always been able to see a space and imagine the realm of possibilities. After moving to Chicago in the late 90s, she was hired on as Creative Director of design firm 555 International. For the next 13 years she collaborated on projects with countless hospitality and retail industry visionaries such as Kevin Boehm and Rob Katz of the Michelin Star-prized Boka Restaurant Group. Working alongside folks like Hugh Hefner, Michael Morton and Steve Wynn she learned that ordinary people become legends because of their personality, talent and drive. The same can 1000% be said about the award-winning designer. In 2014, Karen launched her multidisciplinary creative house Studio K in Chicago’s West Loop. There she has continued to expand her own realm of capabilities and create something that didn’t exist before. Never will the designer say “yes” just for the sake of it.

I feel like I’m two years late to the game but congratulations on starting your own business, Studio K!

Thank you! While nerve-racking, it was the best decision I’ve ever made. Right before our launch I thought “What am I doing?!” but we’ve been so crazy busy ever since so there was no looking back. Now I just wonder, where are all these people coming from?!

You’re hilarious. What’s been the biggest challenge of running your own company so far?

Growing the team in the way that I want to—not too fast or slow— and choosing the right projects.

As you know, Nashville was a real turning point for me. Chicago was the same for you: right time and place compounded with lots of talent and ambition. Why do you think things took off so quickly for you after moving there in 1998?

You know those forms where you have to connect the dots to see the final shape? Well that symbolizes my entire career. Once I’m in the flow state I try to go with it.

You don’t interfere with fate.

When interviews became my niche it seemed like life suddenly became much easier. Was it a similar transition for you from fashion to interior design?

Yes. Even as a fashion student my concentration was textile designs. An internship in my second year made me realize fashion wasn’t for me and oddly enough, once I transferred over to the interior design program restaurant accessories became my focus. Shortly after, I met a gentleman who owned a retail design company who brought me on. A year later, we started designing restaurants.

I love that you fell into your dream industry.

Seriously! Being considered a specialist in restaurant design is unbelievable. Even if something doesn’t make sense at the time I have confidence in what my intuition is communicating to me. I use less of my head and more of my heart. A dear friend of mine is a successful saxophone player and composer. He’s always been a tortured soul who naturally attracts the drama. One day, on a yoga retreat, he turned to me and said, “I came to a crazy revelation, for something to be good… it doesn’t have to be hard.”

Yes times a million! I love that.

(Laughs) We want our lives to be meaningful, but they don’t necessarily have to be heavy, deep and hard. Now that I’m in my 40s, I realize the best things generally take a fraction of a second. Successful can be effortless.

The irony is, where you became established, the hospitality industry, is fast-paced and crazy. What about it did you find so appealing?

Whether it’s a restaurant, high-end student housing or private residence I am driven by the psychology of every design project. I really love producing experiences— just by switching up the layout or lighting of a space you can influence the way someone interacts with it. Restaurants have been my thing for a long time but I’d also love to improve the experience of airports well. Urban planning and outdoor areas are calling me. I want to eliminate the boundaries between what design is or could be.

Have you always been in tune with space and energy?

I am really sensitive to how my surroundings make me feel. First and foremost, every design is rooted in comfort. When I first came to the US I was shocked by the rows of cubicles at my architectural firm. I had never seen one before and thought, how are these other people not sad?!

It’s incomprehensible how people can find inspiration in those environments. They suck.

(Laughs) Yes but Lily, a lot of people don’t feel from that level, which is why I created very strict rules about the kinds of clients I take on. We interview the clients that we feel are worthy of investing in. While you have to make a living, this is what we do and who we are.

When did you start taking yourself seriously enough to choose your clients?

About two years before I left 555 International. For a long time I required a lot of edification—pats on the back and clients saying, “You did a great job!” Even if someone was an asshole my driving force was trying to please them. Starting my own company meant that I didn’t have to explain myself anymore. Bad energy can undermine even the best efforts.

What are the rules at Studio K?

No drama, no gossip. A culture of total security is something we’ve built intentionally and focus on daily. Crazy enough, that commodore is why everyone at our office gets along.

So what’s your personal philosophy?

My personal religion is based upon the theory that everything we need to know is already within us. The trick is to find it. Those little ‘aha’ moments are when you finally align your personality with what you’re supposed to be doing. I don’t need to fly to Timbuktu and sit on a mountain to hear what is behind my thoughts. Once I became in sync with myself, total creative freedom became second nature.

I also feel that when I came into my own it was about clearing away the crud. I became who I already was.

Right! It’s about accessing the purity underneath all of the layers that mom or dad or the newspaper said. You find that version of you and then allow enough space to be with it. A great therapist taught me once to keep both the good and bad company, without any judgment. If I can sit with what makes me uncomfortable without turning on the TV or having another drink I have an entirely different reaction. Mastering that technique made life much easier as did making peace with the mistakes I’ve made.

Did you ever have anyone in your corner who you could ask for advice?

I had a really strong mentor in school who said to me once, “Well… that project failed. Don’t do that again.” After I cried, I realized that she had pushed me to be the best I could be. You don’t get an A for effort. Give it all you got and start over if you have to.

I can imagine constructive criticism is taken more kindly over in Holland than the US.

Americans are really kind to one another, which is pleasant in day-to-day interactions. But I also think it can create laziness. We don’t call one another to the plate often enough.

Whenever I start to think I’m getting good at receiving criticism the universe tests me and I fly off the handle.

Sometimes you put on a pair of jeans and think, “Damn I look good!” You know it and don’t care what anyone else thinks. Other days, you might not feel as secure. The goal is to know something is as good as it could be at that moment in time.

How did you develop such a drive and discipline?

I used to be a gymnast, which taught me to realize that some days I can do a perfect handstand, still as a tree, and others I’d whimper and fall within seconds. I’m still the same person, but some days I’m better at my craft than others. Negativity is just time lost.

Are you able to establish better relationships with your clients when you’re on good terms with yourself?

Oh my god yes! Some might say that I work too much but I see it as spending time on the things that give me joy. Design is what drives me. I’ve seen my longtime clients the Boka Restaurant Group four times since I started working on their latest project. They tell me their idea and I just run with it.

While your designs are beautiful I know that people love working with you cause you’re just an awesome lady to be around.

You’re so sweet. Yesterday a big hotel company said they wanted to hire me even though I’ve never done one before. They said, “That’s exactly why we want you! Design a ‘Karen’ space.” You have to live the life that was meant for you. Creating spaces that feel like me came from owning the woman I am.