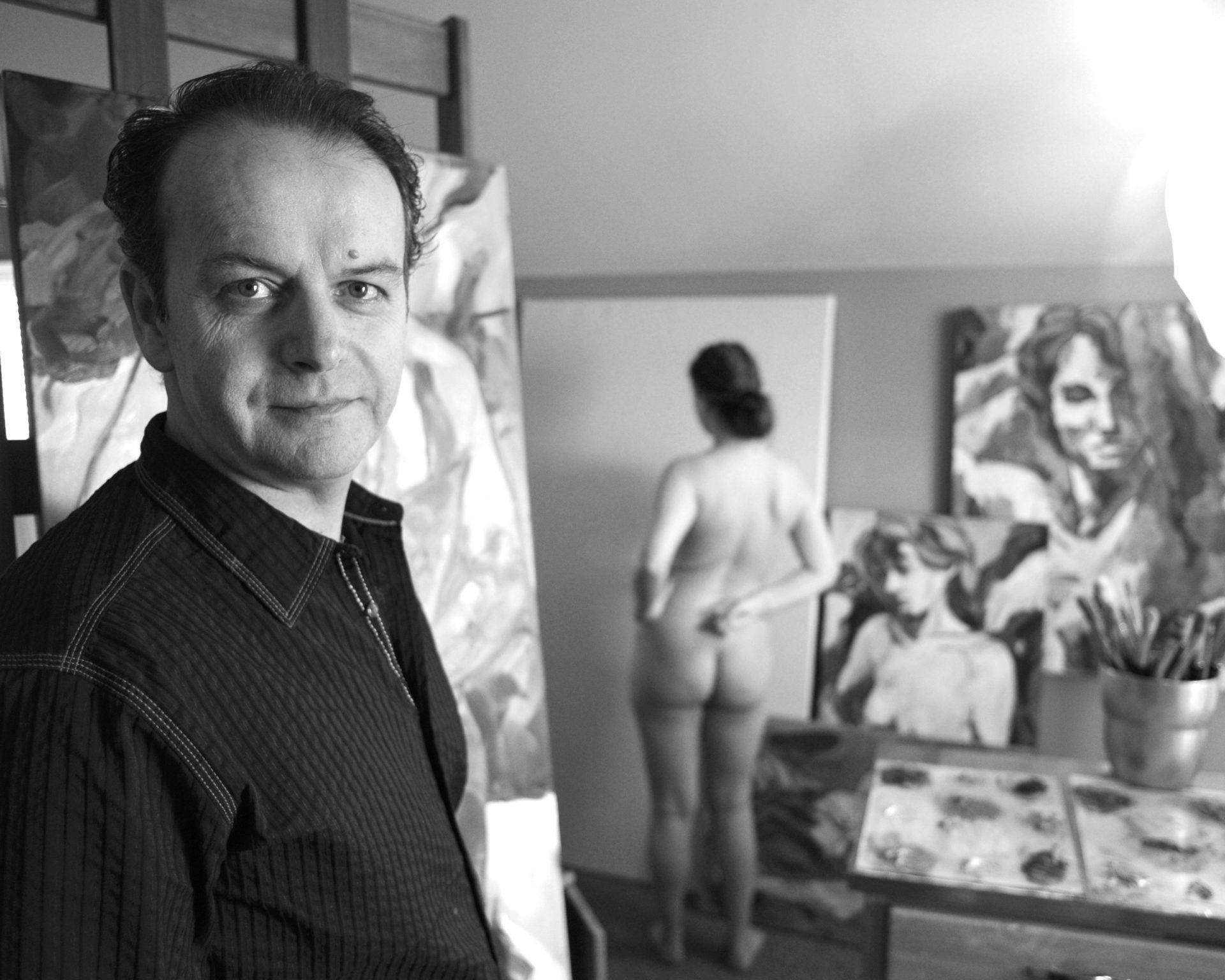 “My style hasn’t changed dramatically in quite awhile. I’ve just been refining it over the years.”

Jon Stone: I have a hard time telling my story in a way that’s interesting. Hopefully you can teach me a trick or two. {We clink water glasses at Pinewood Social.}

When you think about yourself all of the time, like me, telling your story is easy. {Both laugh}

JS: In the corporate world, which I’ve always used to subsidize my art, you go around the room and say something interesting about yourself. So here goes. I was born in London and grew up in New York City.

Hold up, let’s order a drink so I can extract the real deal skeletons from your closet.

Jon: {Laughs} Oh shit! Okay, well I wasn’t the stereotypical boy who was a sissy for liking art. My parents expected me to follow that path because my dad was a poet and mom a sculptor, pianist and visual artist. I coined myself an artist at age five. Am I at three or four details deep yet?

Nope, keep talking. Did you want to pursue art or were you pressured to follow that path?

When I was six I was taken to a private art instructor where I drew a series of mushrooms in pen and ink. That memory is imprinted because from there on out, I was absolutely enchanted by the process. I have a great love for oil paint just like Van Gogh who used to eat his. That’s probably why he was crazy. He really liked it! {Lily laughs so hard she chokes on her drink.}

I think he had a few more problems than that. Can you talk about your style a bit? While extremely sensual, your work has a rough, camouflage aesthetic.

Abstract, expressionist painters are certainly influential in my work. I have a very intuitive connection to action painting, which is why I work from the shoulder, similar to a golf swing, listen to loud, fast music and crank it out.

Why are you attracted to figures in particular?

The figure is timeless, eternally inspiring and a limitless language. Every time I draw someone, which is currently in the 500-range, I have a different experience. You could spend eons understanding the angles of an eyelid.

Are you classically trained?

Like a lot of people I had that fear about starving so I’ve always had the Jeckel and Hyde corporate lifestyle. However, I attended the Arts Students League in New York where I was first exposed to this rich tradition of taking a serious approach to the figure, which I then mixed with the styles of the New York School of painting. It’s like merging Michelangelo and Jackson Pollack. You’ll be hard-pressed to find someone with my style.

Has drawing for decades made you more astute in terms of reading other people?

I am an observer and collector of ideas. In my artwork, the goal is to always capture psychological states in a very subtle way. Recently I started meditating and had the epiphany that my figures are generally in intuitive, mindful states. I capture the moments in between things. You see the person as they really are.

What has been the biggest challenge of your career?

Marketing my work and going after gallery representation after painting for three hours every evening.

What do you want people to feel when they look at your work?

Not to sound all existentialist, but life is fleeting. We’re not around forever and never know what the future holds. I want the viewer to walk away with a greater appreciation for their bodies, mortality and humanness.

You must be so in the zone when you paint.

There is nothing else rattling around in my head. I channel the subject’s mood as well as my own. There’s a book called the Courage to Create, which explains the two states of life: creativity and death. There is nothing in between. People just don’t want to be aware of it. They’ll talk about anything but.