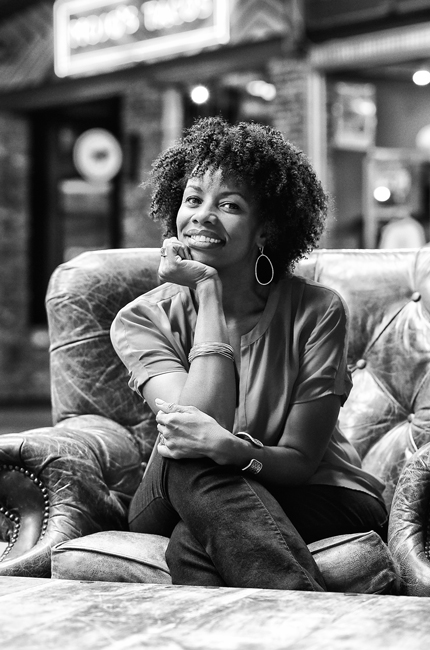 After meeting Shanera Williamson on the set of Talk of the Town, I knew the speaking coach, chaplain, and former broadcast journalist was special. We chatted briefly before my interview. While I could have jumped out of my skin with anxiety, her calming presence alleviated those “I’m about to be on live TV nerves.” A few weeks later, Shanera and I met for breakfast during which I became aware of her background as a speaker, coach, and consultant. Afterwards, I hired her to help with my new talk. Sharing a piece of writing is vulnerable however practicing a speech in front of a stranger can be unnerving. Fortunately, Shanera’s gift is the craft of collaborative message making. She listens, observes, and makes thoughtful suggestions. From our sessions I received a dose of much-needed confidence and the ability to streamline my thoughts in a succinct, relatable manner. Soon enough, I found myself standing in a rock star stance. This free spirit truly is in her element when fine-tuning other’s stories. At the core of her career has been a passion for connection and being a part of other’s self-growth. Coaching, along with a decade of full-time parenting, has made Shanera more empathetic, patient, and perceptive.

When did you realize that you were comfortable on-camera?

In the third grade, a teacher brought a video camera into the classroom. The goal was to show what we looked like while speaking. When the lights came on, I was instantly comfortable while many other students ran for the hills. Performing always came naturally to me, perhaps because I felt that I had something to say. Or maybe it’s because I was the youngest child and in search of attention. (Laughs) Early on, I realized that I wanted to inform and engage with people.

How did you pursue this interest?

In Baltimore, where I grew up, there was a college program that catered to high school students interested in media. That course, which was named after African American television journalist and news correspondent Mal Goode, is where I got my first hands-on experience working in newspapers, radio, and television. At Howard University, located in Washington, D.C., I continued to study broadcast journalism. My interest was always in how various news programs came to life.

Do you have any vivid memories from that time?

One of my first internships was at the ABC Affiliate. I remember being in the car on my way to a crime scene and hearing the photographer and reporter saying, “I hope the body is still there when we arrive.” That was the first time I thought, maybe I don’t want to cover fires, murders, and tragedies. Shortly after, I started “Untold Stories” a segment, which documented positive, inspiring events.

You’ve also worked in radio. How did that come about?

Towards the end of college, my classmates and I were supposed to start job hunting when something in me changed. Suddenly, I didn’t want to pursue the same path that I had been on since the third grade. I decided to give radio a chance, which led me to working on Morning Edition on National Public Radio. I was attracted to that show because I felt that it allowed more time to tell a story.

Did you have any mentors or role models at the time?

In Baltimore, there were several women of color on television. “People Are Talking,” a morning show, was always a highlight of my day. The host, who made everyone feel warm and welcome, was a guest at my church one year for Women’s Day. Her interpretation of the Maya Angelou poem, “Phenomenal Woman” was such a moving experience that I ran up to her afterwards and asked if she could autograph my program. That woman was Oprah Winfrey and I credit her for my love of poetry. She took the piece and made it wholly her own.

That is amazing! What did church, which was the center of your community, mean to you?

Church was where I learned that being a black woman was a wonderful thing after being raised in a predominantly white environment. My African American heritage is how God created me and is a thing to be embraced. Church is where I learned about my history and culture and what it means to be a black American.

What turn did your career path take next?

After I made it to assistant producer at NPR, I had the feeling that I wanted to do something bigger than myself. My husband, who worked in PR, and I decided to flip the script and invest in young people. We trained to become college campus chaplains and help students solve their issues through spirituality. After ten years of chaplain work, I decided to become a full-time mother. This was a renegade move because every woman in my family worked professionally outside of the house. While I realized I was potentially sabotaging my career, I didn’t care because I knew this would make me a better person. This time made my life bigger than me.

How did you become a speaking coach?

When my oldest daughter was in speech and debate class, I oftentimes helped her practice at home. This craft gave her an incredible amount of confidence and poise. She was eventually ranked 9th in the nation. From there, I decided to approach other people and see if they also wanted help adding finesse to their talks. After all, a compelling story is at the crux of any speech.

What do you love most about coaching?

Public speaking is the number-one fear of most people. They would rather die than do it. This comes down to our insecurities, which every human has, and wondering, am I enough or too much? As corny as it may sound, I want to help people realize their inherent value by creating, crafting, and communicating their story. I oftentimes leave my speaking coaching sessions skipping down the road.